Israeli police look at whether slaying of American was 'nationalistic' 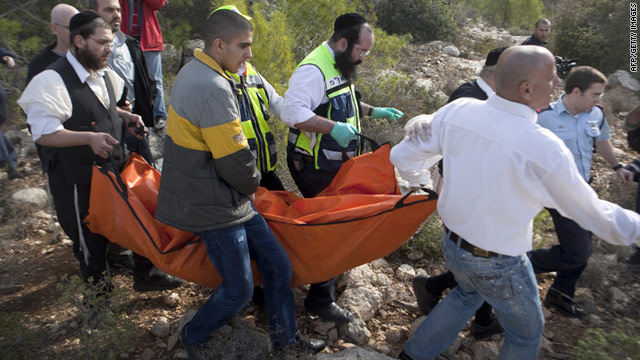 Jerusalem (CNN) -- Israeli authorities are investigating whether the attack that left an American woman dead and her friend injured was "nationalistic," a police spokesman said Monday, using a term for crimes in which a victim is targeted based on an Arab or Israeli background.

Her body was found Sunday after Kay Susan Wilson, Luken's friend and co-worker at a Christian ministry, stumbled into a picnic area with her hands bound, bleeding from multiple stab wounds and asking for help.

Wilson told authorities the two were hiking in a forest near Beit Shemesh, west of Jerusalem, when two men attacked them, tied them to a tree and stabbed them, according to police spokesman Micky Rosenfeld.

Wilson told reporters from her hospital bed Sunday that one of the men was armed with a long serrated knife and that she believes they were Arab.

"It was clear that they came to kill," the Israeli newspaper Haaretz quoted Wilson as saying. "Who carries around a knife like that?"

Wilson said she was wearing a Star of David on a necklace when she was attacked, according to the newspaper.

"He took it off like a gentleman and then turned me around and stabbed in the place where the Star of David had been," Haaretz quoted her as saying.

Rosenfeld confirmed Monday that investigators' primary focus is that the attacks may have involved nationalistic intent, but he said investigators have not yet completely ruled out other possibilities.

Luken and Wilson both worked for CMJ UK, a Christian ministry based in England. Wilson, a British citizen living in Israel, was a senior tour guide for the group, according to a statement posted to the group's website by its CEO, Robin Aldridge.

Luken was an administrator for the group and had recently taken over responsibility for managing the group's tour operations in Israel, Aldridge said.

"She had a beautiful and gentle spirit as well as a strong and vibrant faith," Aldridge said of Luken. "She loved Israel and had visited on several occasions both as a tourist and as a member of CMJ."

"It is a tragedy that such a lively, caring and faith-filled person should have been struck down in such a way," he said.

The Foreign Office in London said it was "aware of the hospitalization of a British national" and was ready to provide assistance if needed.

Luken had worked for CMJ UK for one year, having previously been a government employee, according to Aldridge.

"She had to cope with a move to a new country as well as a new job but quickly made the adjustment and became a key member of our team," Aldridge said.

He said the group's work sharing the Christian faith with the Jewish people in Israel would continue despite the attack.