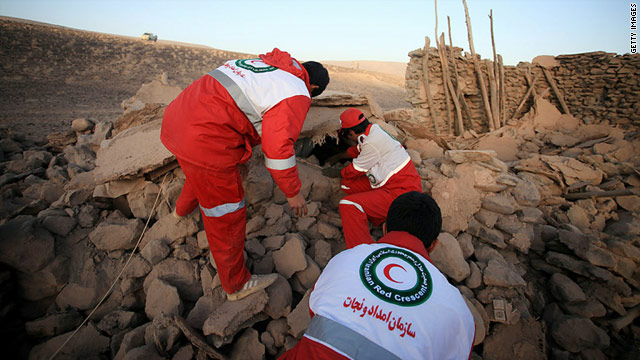 (CNN) -- Rescuers in Iran worked furiously Tuesday to free people trapped under rubble, a day after a powerful earthquake rippled through a rural stretch of villages in the country's southeastern region, Iranian media reported.

Iranian authorities recorded seven deaths and dozens of injuries so far, but authorities expect the casualty toll to rise in the quake -- just over 60 miles away from the site of a deadly tremor that killed 30,000 people seven years ago in the city of Bam.

Iran's Islamic Republic News Agency reported that scores of people are trapped in the debris of buildings that have been destroyed. Many such sites are in hard-to-reach locations, making any rescue operations even more difficult.

Are you there? Share earthquake stories with CNN iReport

Jessica Sigala, a U.S. Geological Survey physicist in Golden, Colorado, thinks the number of deaths could range from between 10 to 1,000, based on statistics and information about past earthquakes.

She said that while this latest event was similar in magnitude to the Bam quake, which measured at 6.6 magnitude, the Monday quake struck a more remote region about 63 miles away from that city.

"That's an important thing to realize. That distance will help decrease the fatality rate as well as the damage," she said. "There isn't a big city anywhere to be seen."

But, she said, that doesn't mean the quake wasn't felt through the region.

Considering the dimensions of the damage, the death toll is expected to rise.
--Kerman governor general
RELATED TOPICS

It was also felt in Bam and other cities, such as Zahedan, Khash and Iranshahr.

"Considering the dimensions of the damage, the death toll is expected to rise," Najjar was quoted as saying by the IRNA news agency.

The high-impact zone's population -- which Najjar estimated at between 5,000 and 6,000 people -- was widely dispersed.

The quake's epicenter was around the town of Hosseinabad. Many of the structures in the quake-hit region use adobe as construction material, and that can crumble in earthquakes, Press TV reported.

Javad Kamali, a deputy governor for Kerman province, told the IRNA that the tremor knocked down phone lines throughout the region. Military and law enforcement workers could communicate only using wireless technology, he added.

Relief and recovery teams, some from outside the area, have converged around the village of Hosseinabad, between the towns of Fahraj and Rigan, Kamali said.

Iran lies on a series of seismic fault lines and experiences earthquakes almost daily, and at times, they have had devastating consequences, such as the quake in Bam.

And there's been plenty of activity in recent months as well. In early November, a 4.9-magnitude earthquake in the northwestern Lorestan province injured at least 80 people, according to IRNA.