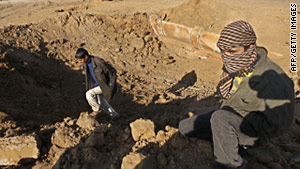 A Hamas security official in Gaza said one person was injured in the attack.

"In response to the intensive firing of rockets into Israel, the IDF targeted a smuggling tunnel and active terror center in the Gaza Strip," said the IDF spokeswoman, who declined to be identified, citing IDF protocol.

Twenty-four mortar shells and three Qassam rockets have been launched from Gaza into Israel since Sunday, according to the IDF. "One landed near a kindergarten three days ago," the spokeswoman said.

The Gaza Strip is controlled by Hamas, the Palestinian Islamist movement that is considered a terrorist organization by the United States, Israel and the European Union.

CNN's Talal Abu-Rahma in Gaza contributed to this report.