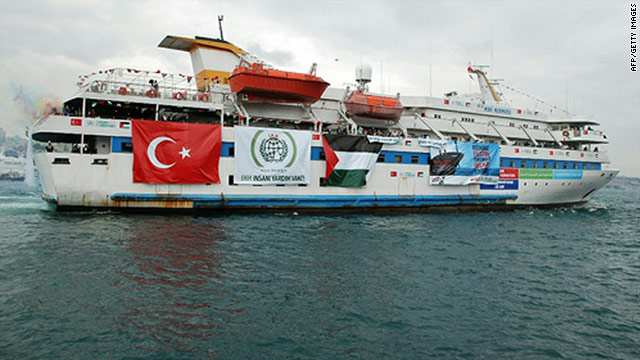 On May 31, Israeli forces intercepted an aid flotilla headed to Gaza from Turkey. Nine Turkish activists were killed. Thousands are expected to greet the boat at the center of the controversy, the Mavi Marmara, when it arrives Sunday in Istanbul.
STORY HIGHLIGHTS

(CNN) -- Turkey's foreign minister continued Saturday to press for an apology from Israel over its forces killing nine Turkish activists, a day before the boat that set off the row between the two countries is scheduled to arrive in Istanbul.

Turkish Foreign Minister Ahmet Davutoglu criticized Israel for not reciprocating his country's efforts to remedy relations, despite Turkey's "wish to reconcile with Israel," according to the state-run Anadolu news agency.

"We are having difficulty, when we don't receive the same will from the other side," he said. "If our friendship with Israel is going to continue, an apology and compensation are the only possible ways for it."

Turkey was once Israel's strongest ally among Muslim nations, but the relationship between the two nations has been chilly since May 31, when Israeli forces intercepted an aid flotilla headed to Gaza from Turkey. Violence broke out, and nine Turkish activists were killed.

Tens of thousands of people are expected Sunday to greet the boat at the center of the controversy, the Mavi Marmara, when it arrives Sunday in Istanbul, according to a press release from Foundation for Human Rights and Freedoms and Humanitarian Relief.

Israel has maintained that its troops used force on the activists only after they were attacked by those on board one boat. But passengers on board insist Israeli troops fired on them without provocation.

On Saturday, Davutoglu said that Tel Aviv's attempts to lay blame were unfounded.

"Turkish citizens were killed in international waters," he told reporters, according to the Anadolu report. "Nothing can cover this fact. Turkey cannot be blamed."

In September, the U.N. Human Rights Council concluded that Israeli forces committed serious violations of international law in the mid-sea interception. The 56-page report described the circumstances of the deaths of "at least six of the passengers" as being "consistent with ... an arbitrary and summary execution."

Officials from Israel and Turkey met earlier this month in Geneva, Switzerland, in an attempt to reduce tensions. That meeting came days after Turkish Prime Minister Tayyip Erdogan sent two firefighting planes to Israel to help combat a deadly wildfire, according to a Turkish foreign ministry official.

Israeli Prime Minister Benjamin Netanyahu publicly thanked Erdogan, then called him to thank him again, the official said. While on the telephone, Netanyahu said he hoped the two countries could discuss the state of their relationship in a different context.