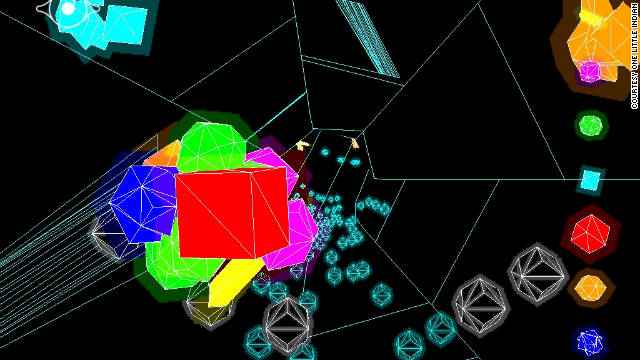 The app for the song "Crystalline" allows users to collect different crystals as they travel through a series of tunnels.
STORY HIGHLIGHTS

(CNN) -- The musician Bjork is releasing the first ever app-album. It's called "Biophilia," and it goes on sale in the Apple App Store on Tuesday.

The app-album is a collection of games, visualizations and musical scores that accompany Bjork's songs, which also is available for a traditional audio-only download. Each song, in effect, becomes its own visual-and-audio experience, letting Bjork's fans interact with her songs in an entirely new way.

The main "Biophilia" app is available for free. Each sub-application, which contains a song and some sort of interactive game, costs 99-cents, or $9.99 for the whole album. A non-app version of the album also is available.

The Icelandic artist is known for being innovative. Her 2004 album "Medulla" was composed almost entirely from human voices, which were remixed into a myriad of sounds. On "Volta," she used touch-sensitive instruments that predate the iPad.

Bjork sat down with CNN to talk about the creative process and purpose behind "Biophilia." You can listen to a CNN Radio Report podcast of the interview. The following is a transcript:

CNN: How did the idea of creating an app for your album or wanting to make your music interactive first come about?

Bjork: Well, believe it or not, this project started because I wanted to simplify things, and then ended up being one of the most complex things I've done. But the initial idea, in a way, was because of the arrival of the touch screen. I was already on my last tour from 2006 to 2008, the "Volta" tour. I had a touch screen instrument called the Lemur and another one called Reactable. And I was performing or people who were playing with me in the band were on those. Once the tour was finished in 2008, I was excited not just to perform with touch screens, but to write with them or kind of use it as much as you could. For me, it tapped into an issue I had as a child and sort of had since.

CNN: Even before you started with this project and started developing with these technologies to write these songs in creative ways, what has been your experience with listening to music? How do you experience music? Is this something you wish had been around before as a way for you to interact with other artists' music?

Bjork: That's a good question, I never really thought about that. Yeah, for sure! People obviously tend to be scared of new tools and always think they have no soul in them. The reason why there is no soul in them is because no one put it there, like you cannot really blame the tool ...

Obviously technology is so sophisticated now that you ... don't have to be the biggest programming genius on Earth to do it. You can do it now in a simple way. And I feel if some of my favorite musicians would do something like this, it would obviously be important that they would do something that is idiosyncratic for them. That it is not just accessorizing their music just for the novelty factor. Because tools are just tools and obviously apps and iPads are just tools, they have to be human and they have to have soul.

CNN: Could you elaborate on the educational workshops that you'll be doing and why they are important for you?

Bjork: The core of this project is kind of educational, not only that I want to teach basic musicology for beginners, but it actually ended up being the project that I learned most. I feel like I've been three years in this intense university. So that's really the core of the project. It's hard to say why. Maybe I'll look back in 10 years time and say why. It felt like the shows are only a part when I'm obviously singing and expressing myself. But it also had to be the other angle where the kids could come and they could express themselves and be interactive. So far, we've gotten offers from some natural history museums and science museums around the planet. Because it would be nice if it was not just the musical side of things, but also the biological. For example, they could come in and they could play with crystals and biologists could tell them about crystals. And musicologists could tell them about structures in music. Then they can get the app to try it out, write their own little songs, and put it on a USB key and take it home. That's the way I think it will work best in the spirit of the project. It cannot really be without that aspect.

CNN: What do you hope people can get out of this app and this experience of interacting with your music?

Bjork: For me, obviously, I want to show that there's connection between nature and music ... It's kind of an interesting project because I understand it more now that I am doing interviews than when I was doing it -- that the core or idea of this project is taking something that has usually been quite academic or bookish and making it impulsive and tactile. So actually explaining it or doing an interview about it or writing or reading a press release about it, makes it sound like 500 times more complicated that it actually is. It's like trying to explain how to dance in an e-mail. If you would just turn it on and do it together, it'd be way easier. I am hoping that it would sort of dissolve this VIP status that musicology has -- that's in only for the chosen few, if you are super clever, and you've studied for billions of years, you understand about scales.