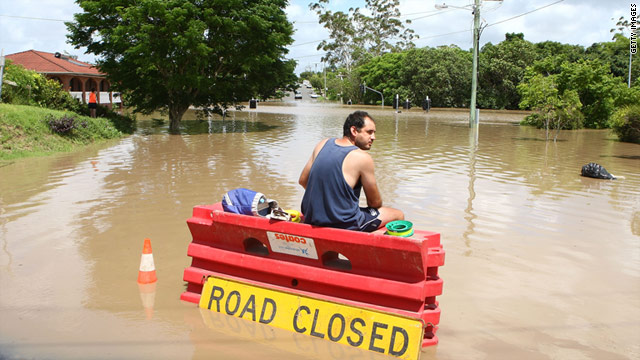 A resident of Fairfield fishes at the end of his street on January 12 in Brisbane, Australia.
STORY HIGHLIGHTS

(CNN) -- The floodwaters sweeping across the state of Queensland in Australia are also soaking one of the few economic success stories in the developed world since the Great Recession.

"This is an order of magnitude worse for Australia than (Hurricane) Katrina was for the U.S.," said Warwick McKibben, research director of economics at Australian National University and a senior fellow with the Brookings Institution. "An area the size of Germany and France combined is under water."

Hurricane Katrina, one of the strongest Atlantic storms on record, wrecked havoc on New Orleans and surrounding areas of the U.S. in August 2005.

One economist said the Australian economy will likely contract in the first quarter of this year as the floodwaters that have plagued the northeastern state worsened sharply in recent days, threatening to put as many as 20,000 homes under water in Brisbane, the third largest city in Australia.

"We had projected 0.7 percent growth this quarter, but now it seems highly likely the economy will contract because of the floods," said Katie Dean, a senior economist at ANZ. The floods have also hit domestic tourism in the area, Dean said, striking during the Christmas and summer holidays.

"The last half of the year was the wettest on record, and now we have the floods," said John Rothfield, an economist for Merrill Lynch in Australia.

Cost estimates for the physical and economic damage of the floods are estimated as high as $13 billion, but analysts caution that the real impact won't be known for some time. The floodwaters lapping through the streets of Brisbane aren't expected to peak until Thursday, and the forecast for above average rainfall continues for the next few months.

The biggest impact to the economy is Australia's burgeoning coal industry, which -- like other of the nation's commodities -- helped buoy the nation's economy through the Great Recession. Growth in Australia contracted during the financial crisis, but the economy escaped recession.

"We were so tied to (demand from) China and India, which were still growing, that we managed to not be impacted by the Great Recession," Rothfield said.

The region also is a major exporter of sugar, cotton and wheat.

Although the deluge will hurt the Australian economy, economists don't project it will put it under water. The economy will still grow, albeit at a slower pace. Reconstruction, once the waters dry up, will add to the total economic output.

Still, lost production of coal and crops will never be replaced.

"If in two months you lose half your coal production, you can't really double production to make it up," Rothfield said. "Those mines were already working at full production."

For some farmers, the damage from the floods is already done. John Curry, a pineapple farmer in central Queensland, had to leave his overripe crop in the field as the farms only road to market was cut off by flood waters. The floods came at the worst possible time -- the middle of Australia's summer harvest season.

"I couldn't give an accurate figure (on the losses) and I'm trying not to worry about that sort of stuff because it's lost," Curry told CNN. "There's no point in worrying about how much it is now. You just keep going."