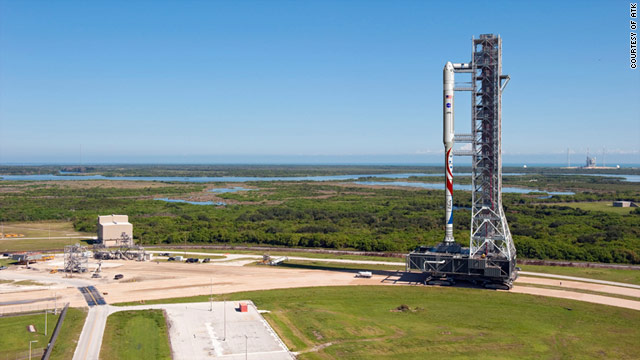 ATK, Alliant Techsystems, has for 30 years built space shuttle booster rockets at its plant in Promontory, Utah. The company has just announced it plans to build a rocket to take astronauts to the international space station.

ATK says it will offer NASA launch services to the station using a new rocket called Liberty. Kent Rominger, former space shuttle astronaut and now ATK's program manager for Liberty, said, "We will be the safest vehicle on the street to carry a crew."

The entrance of ATK into the commercial crew arena clearly signals an intense fight for NASA dollars and contracts to fly crews to the space station. Is this now a commercial space race? "Absolutely yes," Rominger said.

Elon Musk, the multimillionaire head of Space X, has already been awarded a NASA contract to begin flying cargo to the station within a year using his Falcon 9 rocket and Dragon capsule. Musk has said Space X can start flying astronauts in Dragon by 2015.

ATK said its rocket will be ready to fly that same year. Rominger said he believes Liberty is instantly way ahead in the race, because much of the rocket is already rated for humans. Rominger said of Musk, "When it comes to flying humans, he's never demonstrated anything close to that capability." Space X says it welcomes the competition.

"The American-made Falcon 9 launch vehicle and Dragon Spacecraft were designed from the start to be the safest, most reliable and economical vehicle to carry crews into space," said Ken Bowersox, a former astronaut and now vice president of Space X. "We will meet NASA'S certification requirements."

Space X says its Dragon spacecraft will deliver seven astronauts to the station for $140 million. ATK's $180 million price tag does not include the cost of a crew capsule. But Rominger says Liberty will have twice the payload capacity of Musk's Falcon rocket.

The new rocket is a partnership between ATK and Astrium, a company that builds the Ariane 5 launcher for the European Space Agency.

The Liberty rocket would stand some 300 feet tall. It is being designed, ATK said, so any crew capsule NASA chooses could fly on it.

The Space X vehicle is the complete package, both rocket and capsule. ATK will build a five-segment solid rocket booster, which is larger than a shuttle booster. Astrium will provide a liquid fueled upper stage.

ATK officials said their rocket will provide NASA tremendous value because they will assemble Liberty in the Vehicle Assembly Building at the Kennedy Space Center and launch from one of the existing space shuttle launchpads.