EU warns businesses: Put women on boards, or we will 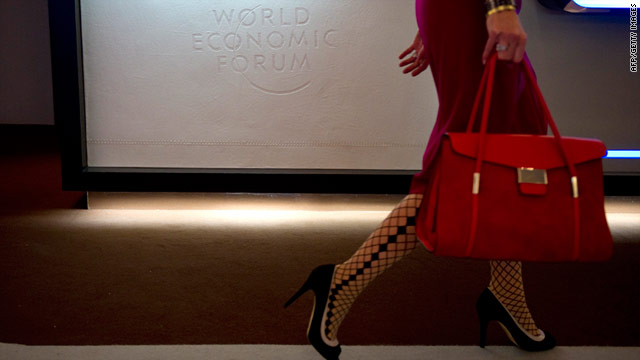 The World Economic Forum introduced a quota for female executives from major sponsors at this year's summit. The European Union is considering imposing a female boardroom quota on public companies.
STORY HIGHLIGHTS

London (CNN) -- Deutsche Bank boss Josef Ackermann's recent comment that a woman's presence on a company board might make meetings "prettier and more colorful" has sent his personal stock plummeting.

It was one of the less constructive contributions to the debate raging in Germany and across Europe about the chronic absence of women serving at the top of major public companies.

Women make up only 3% of CEOs of Fortune 500 companies and in Europe, only 12% of positions on boards are occupied by women, according to research by Russell Reynolds and the European Professional Women's Network.

The situation is improving -- the percentage of women who served on boards in Europe was only 8% in 2004 -- but their representation is still well below levels that some political leaders would like.

Speaking about promoting gender equality this week, German Chancellor Angela Merkel warned German business leaders to "be creative, or we will be creative."

In these difficult economic times, the case for getting more women on company boards has never been stronger.
--EU Justice Commissioner Viviane Reding
RELATED TOPICS

She stopped short of supporting mandatory quotas on the number of women on corporate boards, which other European Union (EU) member states like Spain, and most recently France, have imposed.

But EU Justice Commissioner Viviane Reding says quotas might be necessary if businesses don't start to voluntarily comply. In March, she will sit down with Europe's top business leaders to explore self-regulatory initiatives.

"Gender equality in business is an important policy objective. I am very ambitious in this respect, but we will need a step-by-step approach," Reding said.

Reding would like to see women occupy 30% of supervisory board positions by 2015, and for that figure to rise to 40% by 2020. If self-regulation fails, legislation on quotas may follow, she says.

She hopes that it won't come to this, but if the situation has not improved by 2012, she says she will look at implementing "targeted legal instruments" backed up by "credible sanctions."

The severity of penalties isn't yet clear, but Reding points to the example of Norway, which introduced a 40% quota in 2008. In Norway, which is not a member of the EU, companies are dissolved if they do not respect the quota rules, she says.

What do you think about female boardroom quotas? Tell us in the comments section below.

Getting women in the boardroom isn't just about better representation at the top, advocates of workforce gender equality say. It also makes economic sense, they say.

Operating results of companies which have greater gender diversification are 56% higher, according to a study published last year by consultancy firm McKinsey.

And a 2007 report published by Goldman Sachs said that closing the gender gap could boost U.S. gross domestic product, a broad measure of economic growth, by as much as 9%, and up to 13% in the euro zone.

In Reding's view, a more feminine approach to leadership could transform the fortunes of big business. She also says women might be more diligent, and more risk averse than men.

"Women are much clearer than men: they talk less, have short and efficient meetings and see no need to discuss things until midnight. They say what they will do and they do what they say," she said.

Ackermann's "old school" comments -- as they were subsequently described by a Deutsche Bank spokesman -- were made after he acknowledged that no women currently serve on the bank's executive committee.

Heather Jackson, founder of a UK female business network, The Two Percent Club, says the bank chief's words only serve to trivialize what is a serious business issue.

"I'd like to believe that what he meant to say was that women would bring a more colorful and constructive debate into the boardroom," Jackson told CNN's Richard Quest earlier this week.

Commissioner Reding wasn't impressed either. "The financial crisis may have turned out differently if there had been more Lehman sisters instead of brothers," Reding said.

"In these difficult economic times, the case for getting more women on company boards has never been stronger. We need to use all human capital available to restore Europe's competitiveness at a global level. We cannot afford to leave out 50% of our population."

Jackson, whose company name is a reference to the fact that only 2% of FTSE companies are currently run by women, agrees. She says it's never been as important for women to get to the top.

Jackson believes the absence of women on boards of directors and executive boards isn't the result of sexism, but of greater cultural forces, which can discourage women from striving for boardroom roles.

"It's purely about meritocracy. We need companies to start explaining to women why they need to come to the top and what a difference they are going to make," Jackson said.

"It's about confidence and self-belief and the recognition of the skills that a woman has got. A woman has to remind herself she's worked darned hard to get those skills.

"Take them as far as you can."