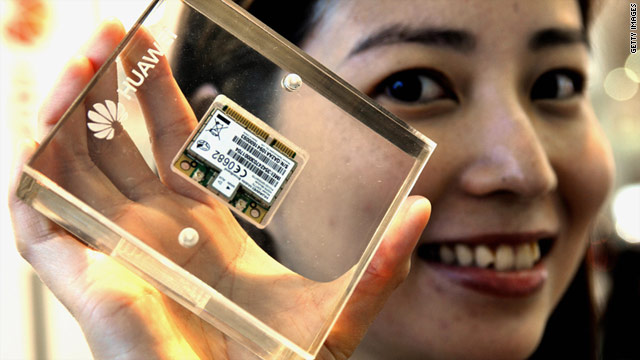 But as part of Beijing's strategy to turn the country's economy into one fueled by innovation rather than manufacturing it is gearing up to create an intellectual property-producing powerhouse of its own.

The Chinese government has outlined an ambitious plan to up its annual patent filings by 2015 to two million, according to a document published by the State Intellectual Property Office titled "National Patent Development Strategy (2011 - 2020).

"China will rank among the top two in the world in terms of the annual number of patents for inventions," the document says. "The number of overseas patent applications filed by Chinese applicants will double."

Patent filings are already increasing. Of the 1.22 million patents filed in China last year, the intellectual property office granted 815,000 patents, a 40% increase from the year before, the state-run China Daily newspaper reported.

If you don't think you are going to get sued in China, you are crazy.
--Steve Dickinson, lawyer

Yet legal experts warn that China's potential rise as a major player in the field of intellectual property could present new challenges for both Chinese and international companies working within the country and abroad.

"If you don't think you are going to get sued in China, you are crazy. People sue all the time and they will sue you," said Steve Dickinson, a China-based lawyer for international law firm Harris & Moure.

In 2009, 30,626 first instance civil intellectual property rights cases were filed in local courts, a 25% increase from the previous year, according to a white paper issued by the Supreme People's Court, the country's highest judicial body. Of those cases all but 117 were resolved.

Previously, seeking intellectual property protections in China was not necessarily prioritized by big businesses. But now international firms operating in China should be aware that things have taken a turn for the litigious, says Tony Chen, a patent attorney with Jones Day in Shanghai.

"International companies, they are going to have more problems if they do not learn to play the game, meaning that they need to be proactive," Chen said.

"If you do not register your IP (intellectual property) in China, that is the equivalent of giving your competitor a royalty free license. If you don't get a Chinese patent that means you have no right to sue.

"[The Chinese] say that if you don't come to China to file, you cannot accuse us of not respecting your own intellectual property because you don't even care to go to the Chinese patent office.

"If China is your largest market, it makes sense for you to budget the most to protect your intellectual property in that market. There is no magic to that."

In 2010, international patent filings from China totaled 13,000 applications, a 61% increase from 2009, the China Daily reported. Dickinson believes that it is only a matter of time before China's domestic courtroom battles are replicated on the international stage.

"Intellectual property is one of the main areas of litigation [in China]. They are really after each other on these issues. They for sure will start to take it overseas. There is no question. The only question is the where and how," he said.

"There is no technology in China that anyone wants to steal yet. But ten years from now, that won't be true, so they are getting ready for it for sure."

If you do not register your intellectual property in China, that is the equivalent of giving your competitor a royalty free license.
--Tony Chen, patent attorney
RELATED TOPICS

So far, less than a handful of Chinese firms have ventured into foreign courts, mainly because it is too expensive to hire lawyers and too hard to understand legal systems abroad.

"Chinese companies using foreign courts to sue international competitors; that is still very, very rare. It does not happen that often," Chen said.

And in 2006 Netac Technology, a Shenzhen-based company that makes flash drives, sued the Texas-based PNY Technologies for infringement of Netac's flash memory patent. Two years later, the companies agreed to settle out of court.

"When the case was filed, people thought maybe it was the beginning of a new era when Chinese companies start to have their own U.S. patents and start to go on the offensive. But if you look at the last five years...I think that time has not arrived yet," said Chen.

Others say the number of lawsuits filed by the Chinese in international courts surrounding intellectual property issues will likely to increase as more Chinese companies become engaged with mergers and acquisitions abroad, which, like the Huawei lawsuit, could involve potential copyright breaches or misappropriation of trade secrets.

"One undeniable trend is that Chinese companies are going abroad more and engaging in commercial transactions, including mergers and acquisitions," Stan Abrams, a Beijing-based intellectual property lawyer and law professor, said.