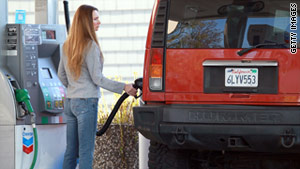 (CNN) -- Gasoline prices have jumped another nickel, to 55 cents a gallon more than a year ago, according to a study published Sunday.

The average price for a gallon of regular is $3.18, the Lundberg Survey found. That's up 5 cents from two weeks ago, publisher Trilby Lundberg said.

"That is a significant bite for motorists considering the continued deep unemployment," Lundberg said.

And it comes amid a "very wide and deep glut of gasoline supply," she added.

The spike is partly due to events in the Middle East and north Africa, Lundberg said.

The most common benchmark for crude oil is West Texas Intermediate on the futures market. That crude is "glutted, in serious oversupply," she said. "But U.S. refiners use many other crudes, some of which have been jumping on Middle East tensions."

The gasoline glut has helped prevent prices from rising even more, she said.

Gas prices may rise another nickel or dime in the coming weeks, Lundberg said. "It would of course be far more if Middle East problems augmented and caused oil prices to skyrocket," she said.

Prices at the pump have risen 49 cents a gallon since late September.

Here are the latest average prices in some U.S. cities: