Crack the 2D code and reap the rewards 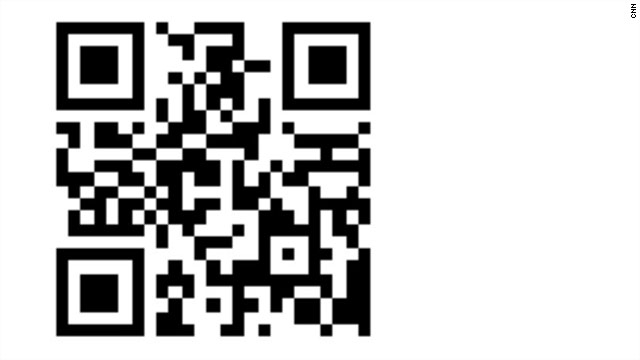 2D barcodes can be an excellent marketing tool, according to mobile consultant, Howard Furr-Barton. Why not scan this one?
STORY HIGHLIGHTS

London (CNN) -- You could be forgiven for wanting to give a wide berth to someone who wanted to talk to you about barcodes -- especially if they stressed theirs was two-dimensional (2D).

But 2D barcodes are becoming all the rage with marketing folk with many predicting 2011 as the year when 2D finally takes off.

Observant readers may have noticed them popping up in the pages of magazines or on TV adverts and occasionally on giant billboards.

But what are they? And what do they do?

Well, like traditional barcodes, 2D codes store information in a plain and seemingly anonymous digital code. But armed with the right reader or scanner -- which can be downloaded (often for free) onto a smart phone -- this data comes alive as the software makes sense of the blocks, transforming them into readable data -- which is often about a brands, products or events.

"It's on everyone's radar, people are aware of it and utilizing it. You are going to see them everywhere because it's pointless not too. They are a really effective low-cost tool," Howard Furr-Barton, an independent UK mobile consultant said.

"If you give away an inch-squared (of advertising space) you can have full interaction someone and you can start to harvest customer data," he added.

You are going to see them everywhere because it's pointless not too. They are a really effective low-cost tool
--Howard Furr-Barton, UK mobile consultant
RELATED TOPICS

There are lots of different 2D matrix barcodes to choose from. Microscan's Data Matrix is popular and Microsoft's "Tag" (launched in 2009), is growing its customer base.

Invented back in 1994 by Denzo Wave -- a subsidiary of automaker Toyota -- originally to track vehicle parts during the manufacturing process, QR code has become incredibly popular in Japan and across the Far East, with companies routinely embedding codes on their products.

The rest of the world has been slower on the uptake, but the rise of smart phone sales worldwide is helping the West catch up.

And in the United States 31% of cell phone users now own a smart phone, according to research published by Nielsen at the end of last year.

Furr-Barton says companies are now responding to this growth and reaping extra rewards from traditional TV and press campaigns by including a 2D code element.

CNN's television viewers are seeing 2D codes on their screens, helping to direct them to our Impact Your World page.

Hollywood is also getting in on the act with Summit Entertainment utilizing Microsoft Tag for tie-ins for their upcoming release "Source Code" starring Jake Gyllenhaal.

These sorts of campaigns are such an easy win, says Furr-Barton, but you need to be careful.

"You've got to enhance their experience," he said. "Don't do a 2D code that takes you to a really bad website where all you will do is turn off potential clients. It needs to be a mobile experience. It's not rocket science. It's an incredibly easy thing to implement."

Despite being an advocate of 2D codes, Furr-Barton doesn't necessarily think they will be around for much longer, estimating they might be all but gone in two or three years.

But don't let that put you off attending to your mobile marketing strategy and infrastructure now, says Furr-Barton.

Every bit of infrastructure you put in place for 2D codes will still be valid when contactless technology enters the mainstream over the next few years.