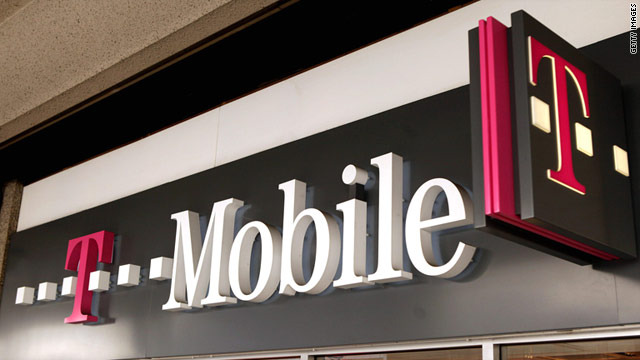 New York (CNN) -- AT&T will acquire T-Mobile USA from telecommunications company Deutsche Telekom for an estimated $39 billion in cash and stocks, the companies said in a joint release Sunday.

The acquisition will expand AT&T's 4G network 1.2 million square miles and will be accessible to an additional 46.5 million Americans, the statement said. AT&T also expects to gain enough cell towers to increase its network density by 30%.

"This transaction represents a major commitment to strengthen and expand critical infrastructure for our nation's future," AT&T chief executive Randall Stephenson said in a statement.

The $39 billion purchase will include a $25 billion cash payment; the remainder will be paid using AT&T stock. AT&T can increase the cash portion of the price tag by up to $4.2 billion while cutting the stock portion.

As part of the acquisition, Deutsche Telekom will have an 8% equity stake in AT&T and a company representative will join the AT&T board of directors.

The agreement has been approved by the boards of directors at both AT&T and Deutsche Telekom.

The new entity would be the biggest in the US, combining AT&T's 95 million customers with T-Mobile's 34 million users for a total of 130 million subscribers.

AT&T said the transaction would quickly provide "the spectrum and network efficiencies necessary ... to address impending spectrum exhaust in key markets" due to the exponential growth of traffic on its network.

The telecom giant added that it expects to gain enough cell towers through the deal to increase its network density by 30%.

As part of the merger, AT&T committed to expand its 4G network 1.2 million square miles, making it accessible to an additional 46.5 million Americans, mostly in rural and smaller communities, the statement said.

The AT&T release notes that its 4G expansion would help achieve the Federal Communications Commission and President Obama's goals to connect "every part of America to the digital age."

The $39 billion purchase will include a $25 billion cash payment; the remainder will be paid using AT&T stock. AT&T can increase the cash portion of the payment by up to $4.2 billion while cutting the stock portion.

AT&T didn't directly address how the merger would affect the new company's pricing. But on the website it built to announce the deal, www.mobilizeeverything.com, it notes: "Historically, during periods when carriers combined to achieve efficiencies, U.S. wireless prices fell."

The company also cites a 2010 report from the U.S. General Accounting Office which found that the average cost of wireless services (adjusted for inflation) "declined 50 percent from 1999 to 2009, during a period which saw five major wireless mergers." The agreement has been approved by the boards of directors at both AT&T and Deutsche Telekom, but will be subject to regulatory approval.

Charles Golvin from Forrester Research said: "AT&T's acquisition of T-Mobile, if approved, brings good news and bad news. The good news: high-speed mobile broadband service will improve in quality and coverage, including ? in the long run ? those in rural communities outside the reach of terrestrial broadband today.

"The bad news: the cost of that service won't come down nearly as fast as customers would like, since AT&T and Verizon Wireless combined would own nearly three out of every four wireless subscriptions in the US. While clearly troublesome for Sprint and other mobile smaller mobile competitors, It's also bad news for cable operators, whose incipient mobility products will suffer in comparison to what AT&T and Verizon can offer."