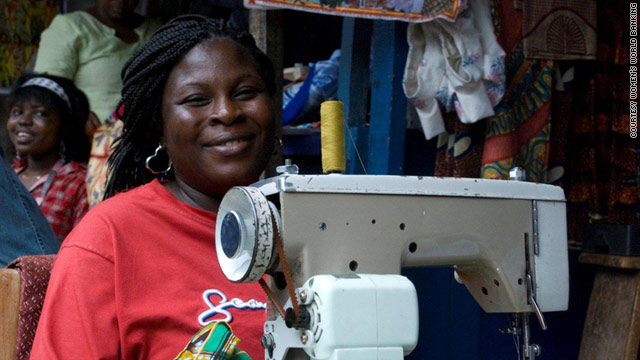 A Ghanaian women who has taken advantage of a microfinance loan.
STORY HIGHLIGHTS

(CNN) -- It has been lauded as one of the most promising ways of using the market to reduce poverty and boost economies in some of the world's most deprived areas.

But in recent months the work of microfinance institutions (MFIs), which provide small loans to poor people with no access to traditional banking services, has come under scrutiny after a spate of suicides in the Indian province of Andhra Pradesh was linked to borrowers' inability to repay their loans.

The news made international headlines and highlighted how accumulated debt can harm borrowers required to pay interest rates typically as high as 30%.

"Microcredit itself it has not really proved a panacea," says Kamal Munir of the UK's Cambridge Judge Business School, who has been monitoring the industry as an advisor to various international financial institutions.

Microcredit itself it has not really proved a panacea.
--Kamal Munir, Cambridge Judge Business School

"If anything, it has trapped a lot of people in a vicious debt cycle," he adds, noting that many borrowers find they need to take extra loans to repay previous debts.

According to the Microfinance Information Exchange, a non-profit group that tracks the industry, there are eight million microfinance borrowers in Africa, in contrast to industry leader South Asia where there are more than 50 million.

A 2010 study focused on sub-Saharan Africa painted a mixed picture about the impact of microfinance on the lives of poor people in the region.

Researchers from the University of London's Institute of Education (IOE) and the University of Johannesburg found that some microfinance projects have the potential to boost the quality of borrowers' lives by increasing incomes and improving food security as well as access to health and housing.

But the authors of the report "What is the impact of microfinance on poor people?" also note that in some cases microfinance in Africa fails to improve the lives of deprived people, while sometimes it even makes them poorer.

According to the study, this happens because these high-risk borrowers often need to use the money for day-to-day consumption, instead of investing in their futures. In other cases, their "businesses fail to produce enough profit to pay high interest rates."

Report author Ruth Stewart, of the IOE, says that because the repayment of loans usually has to start very quickly -- often within a week or a month of the loan being taken out -- many borrowers turn to short-term investments hoping they will make a quick profit.

Such investments usually fail to produce enough long-term returns to pay the interest on the loan, which pushes people to turn to borrowing again.

"There are clear indications that microcredit clients in some areas, the longer they remain in the credit programs and the more cycles of loans they go through, the more likely they are to fail," says Stewart.

Such failures can be damaging not only for the borrowers themselves but also for the industry as a whole, which relies on debt repayments.

It is absolutely critical that a microfinance institution will not lend a second or a third loan to a client that can't afford to repay it.
--Mary Ellen Iskenderian, head of WWB
RELATED TOPICS

Stewart says the crisis in Andhra Pradesh can provide some key lessons to MFIs operating in Africa that will help maximize benefits for borrowers and minimize harm.

"Because it is a young industry there's a potential to learn from what's going on in India and make some understanding to prevent the crisis from escalating," she says.

She calls on MFIs to adopt a more careful approach to lending instead of using it as a blanket solution and offering it to everybody.

"Given that there is potential for harm as well as good, there is a responsibility for institutions to be more cautious about who they lend to in order to maximize the chance of what they're doing is helping Africa's poor instead of creating a problem," says Stewart.

Some voices within the industry agree that there needs to be more responsible lending as well as better due diligence and increased transparency in pricing policies.

"It is absolutely critical that a microfinance institution will not lend a second or a third loan to a client that can't afford to repay it," says Mary Ellen Iskenderian, chief executive of Women's World Banking, a global network of MFIs.

She adds that better risk assessment would be beneficial not only for the borrowers but for the industry as well.

"What we've seen globally since the financial crisis set in is that MFIs, even if they are group lenders, the ones that did individual credit analysis and actually assessed the household's capacity for a loan are the ones who performed most strongly in the last two years," says Iskenderian.