Japan and energy: What's the alternative? 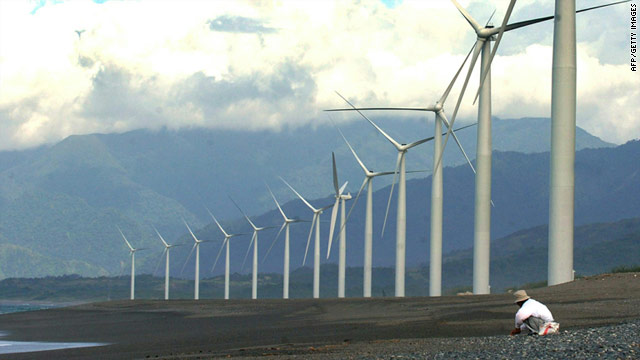 Could windfarms such as this one in the northern Philippines be the answer to Japan's future energy needs?
STORY HIGHLIGHTS

(CNN) -- As Japan's earthquake and tsunami ripped through the Fukushima Daiichi nuclear power plant, the wind turbines at nearby Takine Ojiroi Wind Farm did what they were designed to do: They swayed, they stopped, and they electronically checked themselves.

"Except for one wind farm that was very close to the nuclear power plant, all our turbines were up and running after the quake," said Sean Sutton of Vestas, the world's largest manufacturer of electricity generating wind turbines.

"And we are able to remotely monitor the turbines that were down (stopped)," he said.

As a source of power, wind energy is about as clean, safe and earthquake-proof as it gets -- the problem is it generates a fraction of Japan's energy needs.

Compared with the massive 4,696MW output of the six reactors at Fukushima Daiichi nuclear plant, the 23 turbines at Takine Ojiroi can produce just 46MW -- enough for 30,000 households.

With just 1% of the capacity of the nuclear-powered leviathan just a few kilometers away, the wind farm is a microcosm of the contribution of wind power to Japan's energy mix.

Currently, Japan gets 27% of its power from coal, 26% from gas, 24% from nuclear, 13% from oil, and 8% from hydro. The remaining 2% is occupied by renewables such as geothermal power stations, solar and wind.

While renewable energy companies are loathe to admit it, as Japan still counts the human cost of the quake, the nuclear crisis at Fukushima may be the best thing that ever happened to the sector.

Last week, the share prices of renewable energy companies soared as much as 10%. Nuclear companies, meanwhile, tanked as China -- which has the world's largest commitment to nuclear power with 13 plants in operation and more than 27 in the pipeline -- announced it would suspend approval for new nuclear power projects.

Germany, too, has suspended its nuclear program and ordered seven older plants closed during the moratorium. At the same time, Berlin has boosted the size of the government's renewable energy fund from €300 million ($425 million) to €1 billion.

Renewable energy companies admit their fortunes are closely tied to the vagaries of the oil market. Every sustained price spike sees renewed interest and funding in alternative energy. This interest ebbs when oil prices fall to more affordable levels.

However, the nuclear crisis in Fukushima -- coupled with events in Libya that have pushed oil to 30-month highs -- has added a new, and many in the industry will be hoping, permanent dimension to the funding of the heavily subsidy-dependent alternatives sector.

"I guess this is the right time to evaluate the options," said Sutton, whose Danish company has its Asia headquarters in Singapore. "Wind power compared with other sources is safe, fast, predictable and clean - it can also be deployed quickly."

He said the Japanese government was now reviewing long-stalled wind power feed-in tariffs -- a form of government subsidy -- under which alternative power producers, including solar power generating households, are paid a premium for feeding power into the grid.

With the Japanese government considering massive offshore wind farm projects that could generate 1,000MW of power, wind companies are betting on strong growth in Japan.

"Previously the government was quite fractured on this issue, but I think if there's any good to come from this nuclear crisis then it will be to help kick start feed-in tariffs for wind," Sutton said.

The Holy Grail for the alternative sector is what is known in the industry as grid parity, where it becomes as cheap to buy wind and solar power as it is to buy other power on the grid. Without feed-in tariffs the dream of grid parity is a long way off.

Japan already has feed-in tariffs for solar power and is the third largest producer of solar power in the world, behind Germany and Spain. While it has ambitious plans for the fast growing energy sector, even the most optimistic projections only put it at 10 % of the energy mix by 2050.

As exciting as alternatives may seem, the answer to Japan's future energy needs is likely to come from more traditional sources, according to Ivo Bozon, a leading energy analyst at McKinsey & Company.

"It takes a long-term commitment to get the scale necessary in renewables to produce meaningful amounts of the power," said Bozon. "There are physical limits on renewable energy -- with wind power it's reliant on onshore winds and with solar it's space and sunlight."

As you go down the list of clean fuels, he explained, discounting those energy sources that take up too much space, rely on intermittent power sources or are simply too expensive to produce, what you end up with is natural gas.

"The biggest lift from this is likely to be in gas, especially in Japan and China, where they have the scale to get plants up and running," he said.

Biomass, fuels produced from biological sources such as palm oil, is also likely to see renewed interest as the pendulum swings away from nuclear power.

"I think all countries will be rethinking their commitment to nuclear in the light of these events. At the very minimum there could be delays," said Bozon.