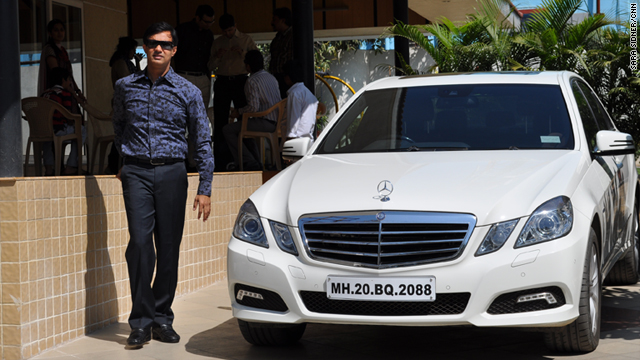 Aurangabad, India (CNN) -- The small-sized Indian city of Aurangabad is vying for the world's attention and is beginning to get it with an expensive stunt dreamed up by one of the city's young entrepreneurs.

"The basic intention behind this idea is to bring our city on the world map," real estate developer and Aurangabad resident Sachin Nagouri said.

To do that, Nagouri and the other movers and shakers of the town made a purchase they thought would be hard to ignore: They bought 151 brand new Mercedes-Benzes all at once, dropping nearly $15 million in a single day.

Like welcome wagons made of luxury leather and blinding white paint, the message the entrepreneurs want to send is this: There is big money to be made in the city of Aurangabad. Come and get it.

"Aurangabad is a very small town, but a very hungry set of entrepreneurs live here," said Capt. Piyush Sinha, who is the president of the Chamber of Marthawada Industries and Agriculture (CMIA).

"Basically, we are hungry to the extent that we would go that extra mile to get investments into Aurangabad and the entire chamber has that kind of vision and mission to ensure that goes on on a continuous basis."

The CMIA, an organization that represents industries in the region, estimates Aurangabad's population at 1.5 million. That makes it a small-sized city in India, especially when compared to its fancy neighbor, Mumbai, which has a population of more than 14 million.

But analysts say it is the smaller- and medium-sized cities that will fuel India's growth in the coming years.

The residents in Aurangabad say their city is an example of that, especially considering the changes that have taken place over the last 15 years.

"There is phenomenal change," said developer Nagouri. The change has been so phenomenal it cannot be expressed in words, he said.

The changes are easy to spot. Along one of the main roads, a sparkling mega-mall gleams in the sunlight. It has 800,000 square feet of retail space and just opened a few months ago.

"Each and every thing is under one roof," customer Sapna Kotecha said as she sat eating ice cream with her husband and kids. "It is exciting."

Not to be outdone by its big-city rivals, the Aurangabad mall has a bowling alley and a roller coaster inside, not something you would normally find even in big city malls.

Aurangabad has already attracted big business from around the world. There is literally something about the water here that has reeled in one particular industry. From local Kingfisher beer to Australia's Fosters beer, the city is bubbling with beer and liquor makers.

"The waters are very good, and interestingly the waters are silica-free. So if you have silica-free water, it eliminates (one of the) processes for the beer industry, and Aurangabad per se is the beer capital of India," CMIA's Sinha said.

But just 20 kilometers from the city center there is a different kind of life. For some villagers, desperation reigns as they struggle to find work in the parched crop fields.

"This year the crops didn't grow. There was hardly any rain. Nothing grew this year," 30-year-old field laborer Ranjana said, as she walked home with a heavy load of firewood balanced on her head.

Ranjana said she and her husband have had one of the worst years yet as farm laborers, due to drought conditions.

"No one has money anymore. All the farmers had to start working in brick kilns. All work with brick and mud," she said.

They know nothing of the growth happening a short drive away. They are just trying to make enough money to feed themselves and their children.

It is the stark reality of India's economic imbalances.

The well-off citizens of Aurangabad are aware of the plight of their not-so-distant neighbors.

Real estate developer Nagouri said he comes from humble beginnings and has prospered beyond his father's wildest dreams. About 15 years ago he said the family lived in a 500-square-foot house. Now they own a 10,000-square-foot home with all the modern luxuries.

Nagouri and his fellow entrepreneurs say they hope their efforts to attract more industry to the city will bring more jobs, and in turn, lift more of their countrymen out of poverty.