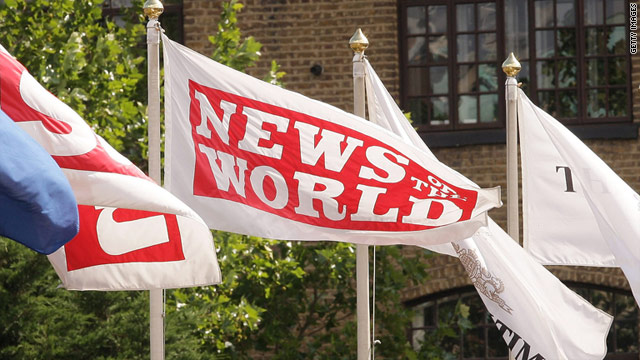 The News of the World, based in London, is part of Rupert Murdoch's News International group.
STORY HIGHLIGHTS

London (CNN) -- News International apologized Friday for the widespread phone hacking scandal which has hit politicians, celebrities and royals in the UK and sparked the resignation of the prime ministerial spokesman earlier this year.

The media conglomerate, owned by Rupert Murdoch, admitted liability for accessing phone message accounts without consent and said in a statement that it would set up a fund to compensate those affected.

In a 2007 court case, Clive Goodman, the royal correspondent to the News of the World was jailed after he admitted hacking into the messages of model Elle MacPherson as well as members of the royal household.

Actress Sienna Miller this week won a court case to access phone records to see if her phone had been hacked; television presenter Chris Tarrant is among the celebrities suing the paper over the scandal, his lawyer Mark Lewis has previously said.

Forrmer UK Prime Minister Gordon Brown wrote to the police last summer to ask if his voice mail had been hacked into, a source close to the situation told CNN in January. Police declined to say whether Brown had written to them or what action they took. A spokeswoman for Brown would not comment on the record.

What is phone hacking?
"Phone hacking" takes advantage of a facility that allows a cellphone user to access their messages from another telephone. Usually this is done by dialling one's own phone and then entering a PIN code when the voicemail system kicks in. Since many users do not bother to change their PIN codes from the default settings, these can sometimes be guessed.

Journalists are also alleged to have "blagged" confidential information such as security numbers from phone companies, sometimes enlisting the help of private investigators.

The New York Times alleged in September 2010 that journalists used a method called "double screwing" to force a phone to voicemail by making simultaneous calls to the same number. Once a correct PIN has been entered, the hacker has full access to the phone owner's messages -- including the option to delete them.
RELATED TOPICS

News International said in its statement: "Following an extensive internal investigation and disclosures through civil legal cases, News International has decided to approach some civil litigants with an unreserved apology and an admission of liability in cases meeting specific criteria."

The company added that it has asked its lawyers to set up a compensation fund to deal with "justifiable" claims -- but would contest cases that it believed were without merit.

"That said, past behaviour at the News of the World in relation to voicemail interception is a matter of genuine regret. It is now apparent that our previous inquiries failed to uncover important evidence and we acknowledge our actions then were not sufficiently robust.

"We continue to co-operate fully with the Metropolitan Police. It was our discovery and voluntary disclosure of this evidence in January that led to the re-opening of the police investigation.

"With that investigation on going, we cannot comment further until its completion."

In January Andy Coulson, prime minister David Cameron's spokesman, stepped down amid speculation he had known about the hacking -- something he has always denied.

Coulson was the editor of the News of the World newspaper in 2007 when Goodman and private investigator Glenn Mulcaire were sentenced to prison for hacking into voice mails of members of the royal family's staff.

Cameron said Coulson was quitting because of the continuing pressures on him and his family. The former newspaper editor also believed that the focus surrounding the issue was "impeding his ability to do his job and was starting to prove a distraction for the Government," Cameron added.

The New York Times alleged in a detailed investigative story last year that -- far from Goodman and Mulcaire being lone culprits -- phone hacking was common practice at the newspaper.

One of the few sources who went on the record in the Times article, former News of the World journalist Sean Hoare, said Coulson, then his boss at the tabloid, "actively encouraged me" to hack into the voice mails of public figures to get stories for the News of the World.

But Coulson's allies have cast doubt on Hoare's credibility since the Times article came out September 1, pointing out that Hoare was fired from the paper over allegations of drug and alcohol abuse.

A British parliamentary committee has also investigated the tabloid.

CNN's Richard Allen Greene and the CNN Wire staff contributed to this report.