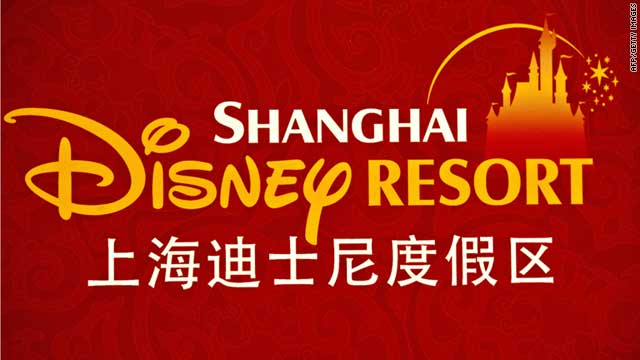 The new resort, which has just been granted approval from the Chinese government, is scheduled to open in about five years.
STORY HIGHLIGHTS
RELATED TOPICS

(CNN) -- The Walt Disney Company broke ground Friday on the Shanghai Disney Resort, after getting approval from the Chinese central government in Beijing.

"Today marks a significant milestone in the history of The Walt Disney Company," said Robert A. Iger, president and CEO of The Walt Disney Company. "Our Shanghai resort will be a world-class family vacation destination that combines classic Disney characters and storytelling with the uniqueness and beauty of China. Working with our Chinese partners, the Shanghai Disney Resort will be both authentically Disney and distinctly Chinese."

"We're incredibly excited to build a Disney resort in Shanghai, one of the world's most vibrant cities," said Thomas O. Staggs, Chairman of Walt Disney Parks and Resorts. "We are hard at work designing Shanghai Disneyland, which when complete will be a special place where guests of all ages will discover a world of imagination, creativity, adventure and thrills."

The resort will "include a Magic Kingdom-style theme park with characteristics tailored to the Shanghai region and other amenities consistent with Disney's destination resorts worldwide," Disney said.

The new resort is scheduled to open in about five years. When it opens, Disney says the park will also have two themed hotels, a large retail, dining and entertainment venue, as well as recreational facilities, a lake and plenty of parking.

In total, building the resort is expected to cost more than four billion dollars, which will be split between the Walt Disney Company and its China partners.

Disney already has a Disneyland resort in Hong Kong, China, as well as in Tokyo, Japan, but Shanghai's would mark the first Disney resort in mainland China.

Disney has offices in Beijing, Shanghai and Guangzhou.