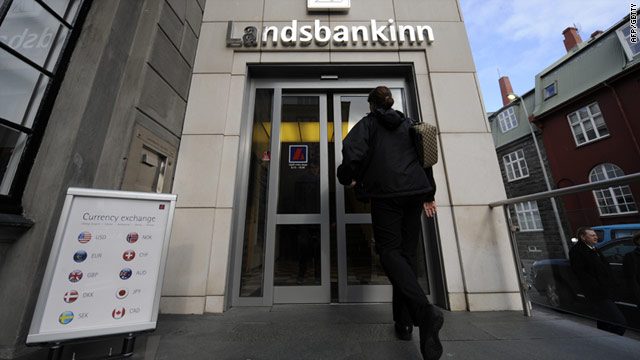 Collapsed Icesave was the online arm of Landsbanki -- the British government says it has "an obligation to get that money back."
STORY HIGHLIGHTS

London (CNN) -- An increasingly bitter dispute between the United Kingdom and Iceland over billions of dollars lost when banks collapsed is likely to end up in court, a top British government minister said Sunday.

The British government has "an obligation to get that money back, and we will continue to pursue that until we do," said Danny Alexander, the chief secretary of the Treasury.

He was speaking Sunday after Iceland's people voted to repeal a law aimed at solving the dispute.

Six out of 10 voters in the referendum on Saturday opposed the law, the government said in a statement Sunday, saying turnout was high.

Alexander called Saturday's Icelandic vote "disappointing," adding, "We have a very difficult financial position as a country ... This money would help."

"There is a legal process going on and we will carry on through these processes," he said on the BBC's "Andrew Marr" show.

The battle results from the collapse of an Icelandic internet bank in October 2008.

Britain and the Netherlands came up with more than $5 billion to bail out savers in their own countries who lost money in the failure of Icesave -- an online retail bank branch of Landsbanki.

They are now trying to claim the money back from Iceland.

Some payments will go ahead later this year, Iceland's government said Sunday, explaining that they were not affected by the vote.

"These partial payments are expected to cover close to a third of priority (depositor) claims. Moreover, latest figures on its assets indicate that the estate (of Landsbanki) will be able to pay over 90% of claims for deposits," the government said in a statement.

Under a European Union directive, Iceland owes compensation to Britain and the Netherlands. The Icelandic government has said it will honor its international obligations.

"The time for negotiations is over," de Jager said in the statement. "Iceland remains obliged to repay. The issue is now for the courts to decide."

The Netherlands Finance Ministry said it is consulting with the United Kingdom about further steps.

The International Monetary Fund loaned Iceland $2.1 billion in November 2009, and said repaying the money to the British and Dutch governments was a requirement of the loan.