Are one in three Africans really middle class? 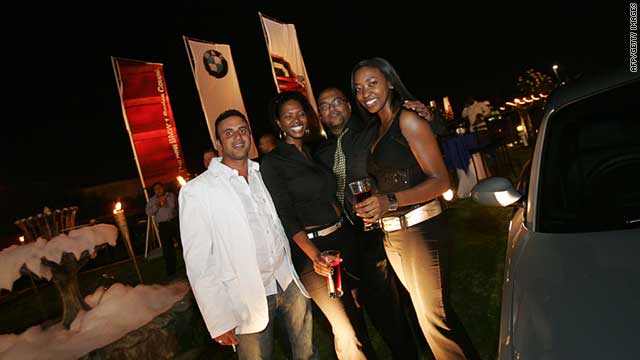 (CNN) -- One out of three Africans are now middle class, according to a new report -- but can that really be true?

A report released last week by the African Development Bank (AFDB) said that Africa's middle class -- defined as people spending between $2 and $20 a day at 2005 prices -- increased to 34.3% of the continent's population in 2010 -- nearly 313 million people.

"The malls that you see mushrooming everywhere, the cars that you see in the roads, the traffic jams in Lagos, Johannesburg, Nairobi -- that speaks of a growing middle class," says Mthuli Ncube, chief economist and vice president of the AFDB.

He also notes that this bourgeoning middle class can lure and reward international investors looking to tap the continent's growing economy.

It's a call to say 'look, please invest in Africa, there are good returns.'
--Mthuli Ncube, VP of AFDB

"It's a call to say 'look, please invest in Africa, there are good returns,'" he says. "Africa is there for everyone to invest and look at."

However, "The Middle of the Pyramid: Dynamics of the Middle Class in Africa" report also underlines that the overall number of people defined as middle class includes large numbers of a "floating class" -- individuals with per-capita expenditure levels of $2 to $4 per day.

Some 180 million people fit in this vulnerable category, facing the possibility of sliding back below the developing-world poverty line of $2 per person per day.

But for some analysts, setting the middle class spending threshold at just $2 per day is simply too low.

"Two dollars a day, to call that a middle class, I think it's a stretch concept," says Thandika Mkandawire, a professor of African Development at the London School of Economics.

"You don't expect the income of the middle class in Africa to be the same as the United States, but it shouldn't be so overstretched that it may lose its meaning," he adds, noting that the African middle class should define itself not only in relation to the continent but also in relation to international standards of consumption.

According to the AFDB report, members of Africa's growing middle class are better educated than their poor counterparts and tend to have salaried jobs or small businesses.

They are also likely to have fewer children as well as own major household durable goods.

"Sales of refrigerators, television sets, mobile phones, motors and automobiles have surged in virtually every country in recent years," the report notes, citing an 81% increase in possession of cars and motors in Ghana since 2006.

But some economists stress that the focus on consumption as a measure of economic growth can be misleading, arguing that a model that is not based on production cannot be sustainable.

"If Wal-Mart goes to China to buy goods, it goes to Africa to sell goods, and that's a problem," says Mkandawire, who is the former director of the United Nations Research Institute for Social Development.

The more important thing countries should look at is investment and employment expansion rather than consumption.
--Thandika Mkandawire, LSE professor
RELATED TOPICS

"The more important thing countries should look at is investment and employment expansion rather than consumption," he says.

The report found that North African countries had the highest proportion of middle class people. Nearly 90% of Tunisians, almost 85% of Moroccans and almost 80% of Egyptians were deemed middle class.

Ncube says the emergence of the middle class is connected with the recent social unrest across North Africa.

"These are people who are enlightened, who are informed, who are plugged into the global economy and understand the environment and the global forces that play, so they are then most likely to self-organize," he says.

The AFDB report also warns of a massive lag between the continent's rich and poor. It said that around 61% of Africa's population fell below the $2 poverty line and 44% below the $1.25 poverty line.

Ncube says inequality will only be dealt if African countries promote more growth that generates employment.

"Quite clearly, create jobs is the way to go," he says, calling for promotion of private sector entrepreneurship and improvement of the quality of education.

"It's really about jobs, it's about small-medium scale enterprises, it's about investment climate, it's about promoting the private sector," says Ncube.