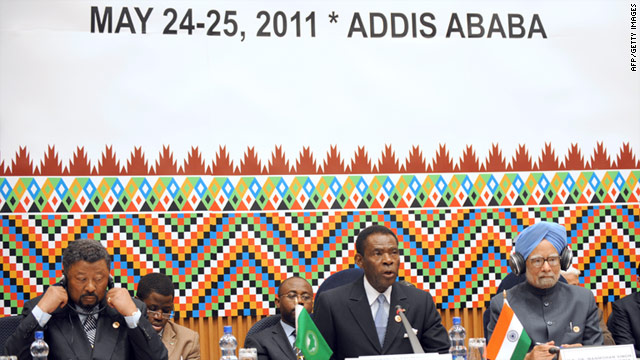 (CNN) -- India has ramped up its economic push into Africa, announcing Wednesday a slew of investment and trading agreements with countries across the continent.

"Africa possesses all the pre-requisites to become a major growth pole of the world in the 21st century," said Singh Tuesday, at the first day of the Addis Ababa summit.

"We will work with Africa to enable it to realize this potential," he added.

The loans package comes as a follow up to the $5.4 billion credit Delhi offered at the first India-Africa summit in 2008.

This $5 billion makes a statement that India is continuing to re-engage in Africa seriously.
--Alex Vines, Chatham House
RELATED TOPICS

"This $5 billion makes a statement that India is continuing to re-engage in Africa seriously," said Alex Vines, of London-based think tank Chatham House.

With its economy expected to expand 8.5% in 2011-12, according to the Organization for Economic Cooperation and Development, India is looking to fuel its growth.

"Definitely India, with its growth projections, will need more energy and natural resources to sustain its emerging economy and that requires further deepening engagement in Africa," said Vines.

"Natural resource diplomacy is one of them (strategies for engagement) -- for this be it oil, coal, uranium -- and another is about widening other connections that India has on the continent -- building infrastructure, agriculture expansion," he added.

In recent years, bilateral trade between India and Africa has soared from about $1 billion in 2001 to $46 billion last year.

Brahma Chellaney, a professor of strategic studies at the privately-funded Center for Policy Research in New Delhi, says that India is trying to differentiate itself from China.

He says India cannot yet match Beijing's political and economic influence on the continent, arguing that India wants to put the emphasis on building strong, mutually beneficial bilateral ties with African countries.

"In fact, India cannot compete with China in terms of acquiring mines, oil fields and other resources in Africa. So, it's doing what it is good at, which is to help build infrastructure development in Africa and create goodwill through a positive role," he said.

Singh, who is on a six-day trip to Africa that started Monday, also pledged an additional $700 million for new institutions and training programs across the continent.

"That is exactly what India is doing in Afghanistan too," said Chellaney.

"They're building universities, highways, providing infrastructure support there, and as a result India has the highest positive rating of all countries in Afghanistan today, according to U.S. opinion polls.

"India is trying to replicate the same model in Africa," he added.