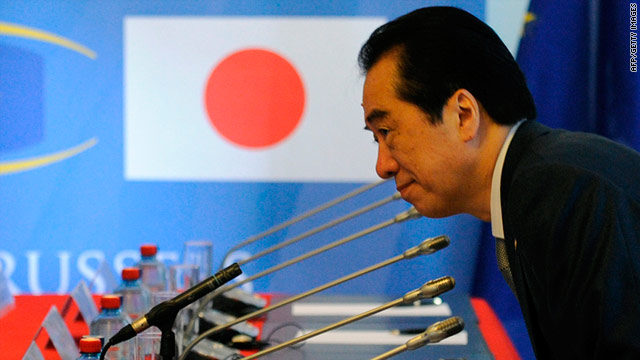 Tokyo (CNN) -- Economic data and analysis out of Japan Tuesday underscore the struggles in the world's third largest economy, and how the lack of clear policy is adding to the problems.

Japan's unemployment rate rose to 4.7% in April, up 0.1% from March. It was the first jump in unemployment in six months in the wake of the 9.0 earthquake and tsunami, reported Japan's Ministry of Internal Affairs and Communications. The data did not factor in three hardest hit prefectures in the tsunami region: Iwate, Miyagi and Fukushima. Those areas saw massive infrastructure and job losses, suggesting the actual unemployment in the country is worse than today's figures suggest.

Japanese production on the rise

There was some brighter data on industrial production, rising 1.0% in April from the previous month. The jump is a significant rebound from March, when it fell a record 15.5% in the wake of the disasters.

Japan's government, saddled with the highest debt to GDP ratio among developed nations, is considering a number of measures to stimulate the economy, fund the reconstruction in the tsunami region and pay off debt. One measure under consideration is a sales tax hike. Japan's Cabinet Office told CNN they have submitted a joint document to a government advisory panel, which is weighing the possible hike. Media reports speculate the hike could jump from 5% to 10%, a figure that the government said had yet to be determined.

The sales tax could prove politically unpopular, as it did last year for Prime Minister Naoto Kan. Kan pushed the doubling of the consumption tax to 10%, shortly after taking office. The move resulted in a voter backlash, damaging his approval rating and costing his party seats in the upper house of Japan's parliament.

Taking such a step now would be a challenge for the beleaguered prime minister, given that members of his own party have hinted they may turn against him. Rival political members are pledging to lodge a no-confidence motion against Kan this week. The politicians pushing the no-confidence motion forward intend to show their displeasure at Kan's handling of the disaster's aftermath and pressure him to resign.

Kan has faced political fights of his life before. Last year, after only a few months in office, Kan's main political opponent within his own party attempted to take control of the Democratic Party of Japan, effectively taking over the premiership. Kan managed to hold onto the title of party leader.

The political in-fighting remains a persistent problem in Japan's politics, a country that has seen six prime ministers in the last five years. Ratings agency Moody's Investors Service underscored what the political fighting means for the struggling economy, placing the country's local and foreign currency bond ratings on review for possible downgrade.

The factors behind the possible downgrade, said Moody's, are the larger than expected costs of the disasters, weak deficit reduction policy and the vulnerability of a long-term fiscal consolidation strategy.