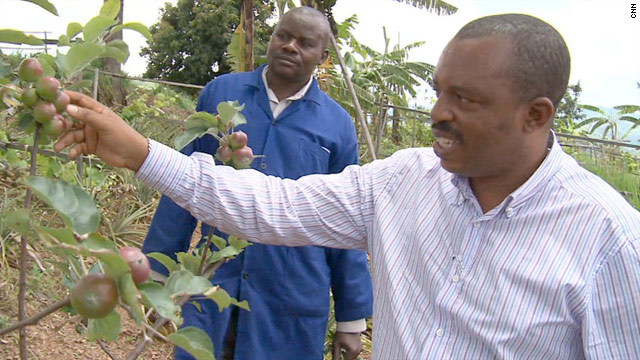 Having established a business empire from the bottom up, he's now training local farmers to help make Rwanda an agricultural exporter.

"My aim is to make sure that the Rwandan people build themselves and get out of poverty," he says.

"My aim is to make sure Rwandan farmers, because they are rated at 90%, feel proud to be farmers. I'm sure I'll achieve it because so far I have achieved a lot."

There's no disputing Gerard's achievements. Twenty-five years ago he had just one employee, who helped him sell the bread he baked at his parents' farm. Now, Gerard says he employs hundreds of workers and buys produce from thousands of farmers.

Although he started out selling his food from a roadside stall, he was soon known not for his snacks, but what he put on them -- his famous "Akabanga" chili sauce.

He now produces his chili sauce in industrial quantities. Akabanga is so strong that workers making it are required to wear a face mask. It has become popular in Rwanda and is shipped across the world for customers wanting the ultimate spicy kick.

I look for that very poor person and help him or her -- not necessarily financially, but train them and give them more knowledge.
--Sina Gerard, entrepreneur
RELATED TOPICS

Gerard, the former baker, now has his fingers in many pies, running a bewildering variety of ventures.

His factories make fruit drinks and banana wine from locally grown produce, and he sells them directly from his own 24-hour roadside shops.

He is now focusing on driving agricultural change. Always the innovator, he has begun producing strawberries rather than staple foods and growing fruits new to Rwanda, such as grapes for wine production, and apples.

Keen to stimulate the local agricultural economy, Gerard gives farmers free seeds, fertilizer and training and buys their crops when they are ready for harvest.

"That's me -- that's how I am," he says. "I love people, and for me to have financial security it's because I live well with all my neighbors here."

"I look for that very poor person and help him or her -- and not necessarily financially, but train them and give them more knowledge," he adds.

He still lives in the same town he was born in because he wants to help people with similar skills and aspirations to his own.

The town did not have a school until Gerard built one. He hopes some of the school's graduates will join him in his work and become successful business people themselves.

But, though he is always a visionary, some of Gerard's methods are more unconventional than others.

He has been experimenting with playing music to his pigs and claims he has seen an improvement in productivity. He has even set up a control group, which is not played music, to prove his pig-nurturing theory.

"What I have realized is that pigs need music," he says. "With my projects of pigs they need music. They eat well, they don't waste what they eat, they deliver well. They even mate well."

But what drives Gerard to keep trying out new ideas and keep expanding into so many different businesses?