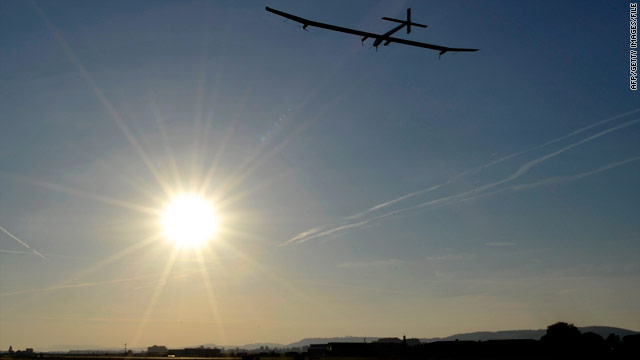 (CNN) -- If the smell of jet fuel or the mere sight of a vapor trail is enough to get your pulse racing, then chances are you don't need to be told that the biggest event in the airline industry is about to take place.

For one week from 19 June 2011, an airfield on the outskirts of Paris will become the center of the airline universe, as anyone who is anyone in the business flocks to Le Bourget for the International Paris Air Show.

The event, held every two years at the very airfield where Charles Lindbergh landed after the first solo transatlantic flight, is the largest and oldest of its kind -- it celebrated its centenary in 2009.

Traditionally it is the venue at which aircraft manufacturers unveil the next big thing: Concorde, the Airbus A380 and countless other innovations all made their debut in Paris.

Organizers hope that one of the biggest draws at this year's show will be Solar Impulse, the solar-powered plane which hit the headlines last year when it flew for 26 hours non-stop fueled only by the sun.

Full coverage of the 2011 Paris Airshow

They hope, because the plane's size (it has a 64-meter wingspan), light weight and slow speed mean it will only be able to take part in flying displays "so long as weather conditions are favorable," they have warned.

Paris is THE industry show - the oldest, the one show where the whole industry comes together. It is where the big deals are done
--Murdo Morrison
RELATED TOPICS

Another aircraft likely to wow the crowds is the Eurocopter X3, a hybrid helicopter with fixed wings as well as rotors, which flies at more than 300 km an hour.

"The thing about helicopters is they have a lot of advantages," Morrison continued. "They can hover, take off vertically, move very slowly, but the one problem they all have is speed, and this prototype is an attempt by Eurocopter to try and do something different."

But the industry will be watching the debut of Boeing's 747-8, the latest version of its long-running wide body jumbo jet, which has been in development for more than six years.

And Morrison says Boeing is likely to be closely watched, too, for a decision on its narrow body strategy.

"The 737 is an old design, its engines use old technology. So will they introduce new generation engines, or will they opt for a whole new plane?" he asked.

"It is a big gamble, an incredible investment -- if you get it wrong it is not unreasonable to say you could bankrupt the company -- we're talking billions of dollars," he continued.

And there will be plenty of talk worth billions of dollars: Paris is where the industry's power brokers come to seal deals worth vast sums, and manufacturers like Boeing and Airbus -- along with smaller firms further down the supply chain -- will all be hoping to come away from the show with order books bulging.

Another company that will be hoping to make an impact at the show is Bombardier, best known for smaller planes like the Lear jet.

"All eyes are on the C series, the new Bombardier attempt to break into the lucrative 'narrow body' market, and to break the Airbus - Boeing duopoly," said Morrison.

"It's very risky, a real gamble. Lots of people think they won't be able to sell enough," he continued. "They've had a few orders, but they'll be going in to Paris hoping to be able to announce a blue chip order."

And all of this will happen well before the public -- plane enthusiasts from around the world -- are even allowed through the gates.

"There are two sides to the Paris Air Show," Morrison told CNN. "One is the aircraft on display, the fact that it is a showpiece event, that the eyes of the world are upon you, but the other is the stories that happen behind the scenes, the negotiations, the wheeling and dealing.

"On the surface, it is about the latest sexy aircraft making their debut -- when the A380 first appeared, you had business meetings grinding to a halt so CEOs could watch this beast flying over --- the spectacle, but it is also where all the business is done: the deals, the glad-handing.

"Paris is very much a trade show. Pretty much everyone has to be there -- it is THE industry show -- the oldest, the one show where the whole industry comes together. If you're not there, your customers, your clients would wonder why. It is where the big deals are done."

One thing is certain: Events on the runway and in the skies above Le Bourget -- and perhaps more importantly in the VIP chalets lining the airfield -- are likely to set the agenda for the airline industry for the years to come.