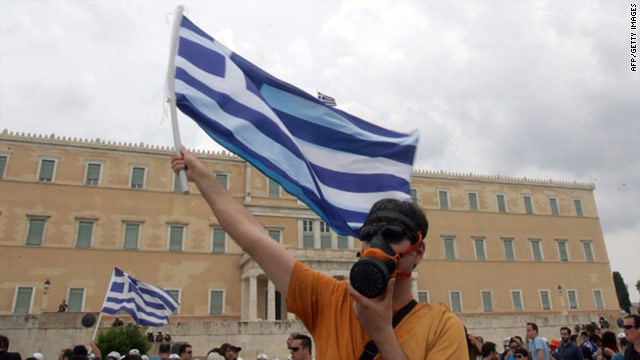 Protests have erupted across Greece over its financial crisis, with demonstrators opposed to planned austerity measures.
STORY HIGHLIGHTS

(CNN) -- What's behind the protests in Greece?

A huge financial mess. People are upset because the government has been trying to push through harsh austerity measures designed to help reduce Greece's huge budget deficit. Cuts imposed so far have led to public sector job losses and tax rises.

This has stirred public unrest and created a crisis for Prime Minister George Papandreou, who is scrambling to save his government in the face of political dissent over the terms of a European Union, International Monetary Fund and European Central Bank bailout. Unless a political agreement can be reached, it could block the release of funds agreed under the bailout package.

How bad is the financial situation in Greece?

Bad enough to warrant the initial $145 billion bail out 18 months ago. Now, with the crisis showing no sign of easing, another bail out, potentially worth $170 billion, is in on the cards, but only if European finance ministers can agree on terms.

With the second bail out possibly weeks away, there are widespread fears that Greece will default on debts by the middle of July. Greece's long-term sovereign credit rating was downgraded by Standard & Poor's (S&P) to the brink of default, making it the lowest-rated country in the world.

How does Greece's situation affect the rest of the world?

European markets have suffered losses in reaction to the Greek crisis, with banks that have large exposure to Greek debt -- including French leviathans BNP Paribas, Credit Agricole and Societe Generale -- taking hits.

There are fears that efforts to restructure Greece's debt could wreak havoc with Europe's banking sector, sparking a re-run of investor panic witnessed in the wake of the 2008 collapse of the Lehman Brothers investment bank.

Greece's woes also reflect badly on the credibility of the euro. A default from Greece is also bound to rekindle fears of possible defaults by other bailed-out euro nations, like Portugal and Ireland, and re-ignite the debate on whether the eurozone -- the 17 nations that have adopted the euro as their common currency -- can survive.

This could knock the whole bloc into the red, affecting the whole world economy. And if Europe resorts to rescue packages involving bodies such as the IMF, this would further damage the euro's reputation and could lead to a substantial fall against other key currencies, especially the U.S. dollar.

So why does Greece need a second bail out?

The initial package assumed Greece would be able to borrow further loans on the open market, but high lending rates mean this has been impossible.

Is the second bailout package a done deal?

Not yet -- the deal could be weeks away. A dispute has emerged between Germany and the rest of Europe over how Greece repays its spiraling debt. Germany wants to see a "soft restructuring" of Greece's loans -- a move that would make private investors share the burden -- but the European Central Bank has warned any compulsory restructuring could lead to a broader crisis, a view apparently shared by ratings agencies. The political crisis currently engulfing Greece is unlikely to further undermine confidence.

Greece crisis could ripple across EU

What does the credit rating mean?

The credit rating is an assessment of a country's ability to repay its debts. By cutting Greece's rating by three points from B to triple C, S&P indicates it thinks it may soon have to downgrade Greece to D -- or default.

What significance does this have for the bailout?

The S&P rating is likely to overshadow the eurozone discussions about a further bailout for Greece. Meanwhile, the International Monetary Fund has warned it will withhold its share of the original bailout if agreement isn't reached.

What is Greece doing to dig itself out of its hole?

Aside from the controversial austerity measures, the country is also looking to sell off the family silver.

It is looking at an extensive privatization program that could see it unload prized assets including stakes in banks, railways, utility firms, ports and the postal service.

There is also a plan to sell off Hellenikon, Athens' former international airport. Other measures include floating Olympic and tourism property assets on the stock exchange and issuing gaming licenses. The target is to raise about $71 billion by 2015.

How did Greece get into this mess in the first place?