Q&A: WPP's Martin Sorrell on what's next for advertising 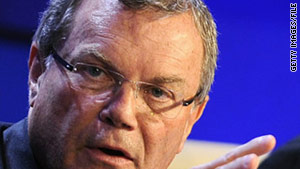 CNN spoke to WPP's Martin Sorrell on the future of the advertising and marketing industry. These are edited extracts from the conversation.

(CNN) -- What will drive growth in the advertising industry over the next 10 years?

I think there are three things -- our strategy is new markets, which are the BRICs and next 11; new media, which is running from PC, through mobile to video content, to social networking; and then, last but not least, consumer insight, which is about data analytics and application of technology. It's apple pie and motherhood in a sense because we have been preaching this for at least the last decade but I think this is going to continue.

What influence will the BRICs and other emerging markets have on the advertising industry in the near future?

I think their importance continues to be underestimated. If I'm looking at the first five months of this year, whilst many people are worried about euro contagion, in the last the few weeks people have got increasing worried about the U.S. [Meanwhile] Asia and Latin America, Africa and the Middle East, even with its problems, and central and eastern Europe continue to power ahead. The fundamental thing is to understand and realize the world is moving at different speeds.

It is true that it is all interlinked and it is also true that the American economy is $15 trillion against the Chinese economy, which is getting up to $6 trillion. It is still the case if America sneezes we may not catch influenza but we will catch a heavy cold.

The thing that I am concerned about is not so much 2011 or 2012 but what's going to happen in 2013, when the U.S. administration and a re-elected [President] Obama have to deal with the deficit, and you can't kick the can down the road any more. In that context the BRICs and next 11 as engines of growth for our business become more and more important.

Will the 30-second slot still be relevant? If so how will it evolve and why?

Post-Lehman and post-recession the number of hours viewed by the consumer in the mature markets on classical television has actually increased not reduced. The explanation could be that there is greater unemployment, with people spending more time at home; we certainly see that with the food industry with take home meals.

But if you observe people watching television they are doing two things. They are watching live events, or "Britain's Got Talent," or "China's Got Talent," or "Ugly Betty" or whatever it happens to be, and at same time they are using other devices, so you have almost like a twin peaks [effect] here.

The media that are really growing are classical television and television in its new forms like cable and satellite, and then new media in all its forms.

The media that are suffering are not so much the 30-second commercial [but] newspapers, periodicals, magazine to a slightly lesser extent, radio.

How will advertising agencies tread the line between use of personal data for targeting, and privacy issues?

As long as consumers are aware of what is involved and it's not hidden for them, we prefer opt out to opt in -- meaning people can opt out if they wish to. I think generally legislators go along with that but you have to be explicit and not opaque about what data is available and how that data might be used.

Consumers are happy with adverts and editorial content merging as long as there is a little note on top of it saying this is advertorial and not being mislead into thinking what looks like editorial is actually an advert. Like product placement on television; as long as it's sophisticated and people understand what's going on and not crude it can work very well.

How will social media impact on advertising and marketing in the future?

Advertising and marketing services is a trillion-dollar industry -- advertising is $500 billion mostly in its classical form, there is another $500 billion which is in consumer insight, market research, public relations, public affairs, digital, branding ... and other forms of specialist communications.

Social networking has probably had its biggest impact on public relations and public affairs. Those industries become more important, firstly because there is a lot of data to analyze, so you do better research, and secondly because social networking is really editorial influence.

People use social networks to communicate with one another, not necessarily to buy or sell or do commercial things. They are trying to build relationships, usually social relationships. You invade that social process at your peril.

What you are trying to do is build communities that have a favorable impression of your product or your service or your company or your brand.

How will innovations such as apps impact on advertising and marketing in the future?

They've already impacted.The problem is that many of them are free and you can't give away content and have a sustainable business approach. There are three things that are probably happening. The first and probably most important is that consumers have to pay for content that they value. The second is that inevitably there will be consolidation amongst the media. The third is that probably there have to be some form of public subsidy of professional media.

What surprises do you think the industry may throw up in the next 10 years?

There will be high volatility; five years ago we would have been in rhapsody about Second Life. Myspace a few years ago was in the lead, now it's been eclipsed.

One thing is certain. A couple of young bright sparks, probably more likely from India and China -- with 2.5 billion people between them, and with intelligence being distributed on a normal bell curve -- [will have] brilliant ideas, they will come from those countries as well as the west.