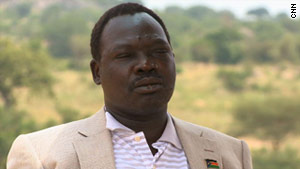 "We will review the contracts that have been signed, look at them critically, make sure that we remain happy," Investment Minister Oyay Deng Ajak said.

Total is not developing an enormous oil field it has held since the 1970s despite recent entreaties from Southern Sudan to do so, Ajak said.

"After the war we asked them to come in. They have not yet come in," he said, suggesting that the newly independent country would break up the block Total holds and auction parts off to other companies.

"The block that was given to them is the whole of Jonglei state, the largest state here," he said. "We are going to look at it. We are going to divide the block into two or three or four ... there is no reason why we can allow one company to monopolize our resources."

Southern Sudan is due to become independent July 9 after fighting a war against the north and then voting peacefully for independence.

It needs huge levels of foreign investment to develop an infrastructure. In addition to Total, China and Malaysia are big investors in Southern Sudan's oil fields.