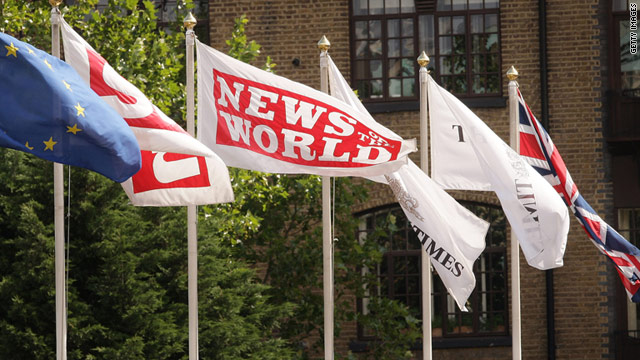 A News of The World flag flies at the News International printing plant at Wapping on July 9, 2009 in London.
STORY HIGHLIGHTS

London (CNN) -- Several major advertisers in the United Kingdom are pulling advertising from the UK's News of the World newspaper amid a wave of public outrage over a phone hacking scandal.

Carmakers Ford and Vauxhall, Virgin Holidays, Halifax and the Co-operative Group are among those to say they are withdrawing adverts that were scheduled to run in the newspaper.

Other big firms, including cell phone providers T-Mobile and Orange and utility firm Npower, say they are reviewing their position with regard to advertising in light of the turmoil over the allegations against media baron Rupert Murdoch's flagship British Sunday paper.

The scandal around the News of the World widened Wednesday, with the father of a victim of the 2005 London terror attacks saying his phone may have been hacked.

That followed claims Tuesday that its journalists also hacked into the phone messages of missing teenager Milly Dowler, who was later found to have been murdered. Prime Minister David Cameron called the allegations "absolutely disgusting."

Ford was among the first to act to distance itself from News of the World, saying Tuesday that it was "concerned by the serious nature of the allegations of past activities against the News of the World, and the high level of public concern."

"While we are not prejudging the outcome of the ongoing investigations, we believe it is appropriate to suspend advertising in the News of the World pending the outcome. In the interim, we will advertise in alternative media within and outside the News International Group."

Vauxhall said it had suspended advertising in the News of the World and would "reconsider its position pending the outcome of investigations into the allegations of phone hacking."

The Halifax bank said in a statement its action was in response to public anger over the story.

"In recognising and responding to consumer reaction, Halifax has cancelled an advertisement in this Sunday's News of the World. This was a tactical decision in the short term whilst we carefully consider our longer term position and its implications."

Carmaker Renault said it had no advertising planned with News of the World and would not commit to any future advertising pending the outcome of formal investigations, "as a result of the seriousness of the continued allegations."

The scandal has prompted calls for a public boycott of the paper -- and its parent company News International -- on social media sites including Facebook and Twitter.

A message at the top of the Boycott News of the World Facebook group, which had more than 5,100 members as of Wednesday, said: "By boycotting this newspaper we can send a message that they are not above the law and their behaviour is heinous and despicable."

Parenting website Mumsnet also said Wednesday it would pull the current advertising campaign for Sky, which is part of Murdoch's media empire, from its website -- at a cost of some £20,000 to £30,000 to itself -- "as members who are pretty much unanimously shocked and disgusted by the News of the World's actions in hacking Milly Dowler's phone thought it incongruous that Mumsnet was carrying advertising for Sky at the present time."

However, analyst Douglas McCabe, of media research firm Enders Analysis, told CNN the cost of the advertisers' actions and any public boycott to News of the World and News International was likely to be limited in the long term.

"There's not a mass of material revenue impact on the business short term," he said.

"Reputation going forward will be tricky for them to manage and there could be longer term implications if more advertisers pull and they pull for a longer period of time -- but at this point, there's very little impact," he said.

The loss of revenue for News of the World as a result of advertising being withdrawn this weekend would be in the realm of tens of thousands of dollars, he said. "The question is, do more businesses jump on the band wagon effect, and suddenly does it extend through the inquiry for a significant period?"

He estimates that 40% of total revenue for the News of the World and its daily sister paper, The Sun, comes from advertising, putting its value at about £260 million ($418 million) a year.

Responding to the phone hacking allegations, Murdoch's News Corp. said Wednesday: "We are committed to addressing these issues fully and have taken a number of important steps to prevent them from happening again."