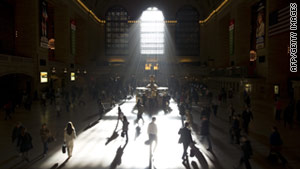 "Our four stores in Manhattan are incredibly popular with customers and we are excited to bring the Apple retail experience to this incredible location," said Apple spokesman Nick Leahy.

The submitted proposal would allow the use of more than 23,000 square feet, and the takeover of both the north and northeast balconies, making it Apple's largest store worldwide.

According to MTA documents, if the proposal is passed Apple will pay an initial $800,000 in rent. However, after 10 years, the annual rent will exceed $1 million.

"We have received a proposal from Apple that has the potential to bring a great new shopping destination to iconic Grand Central Terminal and significantly increase revenues for the MTA's transportation system," said Julie Glave, MTA spokeswoman.

The MTA finance committee will review the terms of lease and vote on the proposal Monday, according to MTA spokesman Aaron Donovan. If it passes, the MTA board will vote to authorize the proposal Wednesday.

CNN's Nina Raja and Jeff Stein contributed to this report.