Giant-snail farming: the next big thing? 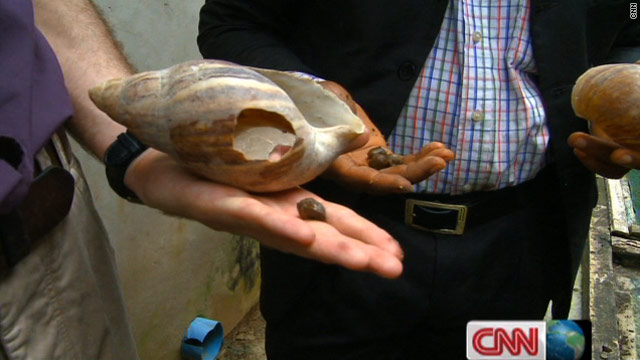 Lagos, Nigeria (CNN) -- The harvesting of snails as a delicacy has traditionally been synonymous with countries such as France and Italy.

But for one savvy entrepreneur in Nigeria, a giant version of the meaty mollusc is helping him tap into a market he says can generate high profits with little initial outlay.

Snail farming is often done small-scale at the back of homes and office compounds in the Nigerian city of Lagos. That's where businessman Ismail AbdulAzeez is rearing giant African snails, which can grow up to 20 cm (7.9 inches) in length.

"To get something like this," says AbdulAzeez holding up a snail shell the size of his palm, "you'll (initially) spend about 25 Naira (16 cents), assuming you're working with about 10,000 snails at a time."

AbdulAzeez has just sold his latest harvest to a number of luxury hotels and high-class restaurants in Lagos.

But he says the snails he grows are also receiving the attention of foreign buyers in Europe and beyond -- attracted by the size of the snails and their relatively low price.

The UK, Norway and other European countries are some of the final destinations for his snails.

And AbdulAzeez is quick to point out the potential that start ups such as his own could have in helping other young entrepreneurs climb their way out of poverty.

He claims to have so far taught more than 1,000 people how to create their own snail farm businesses and says that those who are successful could earn as much as $15,000 every two years.

I would say that the snail farming provides opportunities that are yet to be seized.
--K.A. Monney, author of Giant African Snail Farming Made Fun
RELATED TOPICS

But others say snail farming in Nigeria, and other West African countries remains, on the whole, an area of unfulfilled potential.

According to K.A. Monney, head of the Department of Entomology and Wildlife at Ghana's University of Cape Coast, snail entrepreneurs like AbdulAzeez remain the exception rather than the rule.

"Such ventures are lacking in Africa, I am afraid. To the best of my knowledge snail farming attempts have been sporadic," says Monney, who is also author of the book, "Giant African Snail Farming Made Fun."

He adds that while some businesses may have brought structure, order and professionalism to the sector, much of what passes for snail harvesting in West Africa remains opportunistic.

During the West African wet season of April to August -- when snails break their otherwise dormant state in order to breed -- it is not uncommon for them to be captured in the wild and sold in local marketplaces, says Monney.

Outside of this period, however, there is a very noticeable lack of snail meat or snail product for sale almost everywhere in West Africa.

"In the dry season ... December to March, you don't get anybody selling snails," he says. "If there were farms that (is when) you would have got them."

But despite the difficulties of structure and planning, Monney believes that turning giant snail farming into a viable and profitable industry remains a distinct possibility.

"I would say that the snail farming provides opportunities that are yet to be seized. I have researched into snail farming quite a bit and the potential is there ... but it has not been explored and exploited," he says.

He adds: "My hope is that as people get to know how to produce them a commodity chain would be established."