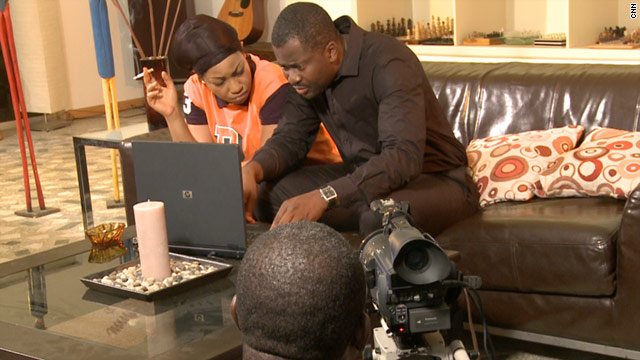 Lagos, Nigeria (CNN) -- How to make money from movies online is a question vexing studio executives the world over. But a Nigerian tech entrepreneur claims to have the answer -- for his country's burgeoning film industry at least.

Jason Njoku is the managing director of Nollywood Love, an online entertainment company based in Lagos that aims to bring the very best of Nigeria's "Nollywood" cinema to a pan-African and global audience.

Since last December, it has been buying up the rights to Nollywood movies and uploading them for viewing on a dedicated YouTube channel.

"I was swept up with this wave of amazing content, which when I looked at ways to actually consume it, there wasn't any -- the legal distribution infrastructure just wasn't there, so I thought let me just try it and add some value," says Njoku.

Bringing Nollywood to the world

His company now employs more than 40 people and its movies attract over 2.5 million views around the world each week. It makes money by showing advertising before its films and aims to rake in more than $1 million in profits in its first full operational year.

"Our model is really simple," says Njoku. "Typically if you're in the West -- U.S., UK, continental Europe -- before you watch a movie you might watch a 15-20 second pre-roll for one of the big companies there.

"We try to keep it as non-intrusive as possible, so we explain to people that you just have to watch a few ads to watch the whole movie."

He says its most popular movie is currently "BlackBerry Babes," a four-part comedy series about three materialistic women obsessed with their BlackBerry phones. The first part alone has been watched 650,000 times, says Njoku.

He puts the site's early success down to a mixture of the convenience of low-cost web platforms and the prolific nature of Nigeria's film industry -- Nollywood currently churns out over 2,000 movies every year, second only in number to India's Bollywood.

Yet compared to the professional and highly structured nature of the world's most successful film sectors, Nollywood's corporate and distribution processes are near non-existent, says Njoku.

Films are usually low-budget, star locally famous actors and are filmed, edited and released on DVD or VCD within a month -- going on sale at local marketplaces across Nigeria.

But that's no barrier for Njoku, who is already focused on further improvement and growth -- particularly within Africa.

As much as 90% of Nollywood Love's site traffic currently comes from outside of the continent -- in regions like the EU, North America, the Caribbean and the Middle East -- where broadband services are more readily available and where large Nigerian Diasporas are located.

But as access to the internet inevitably becomes more commonplace, Njoku hopes that more and more Africa-based viewers will begin to form Nollywood Love's primary audience.

"For me, it's almost like being in Silicon Valley in 1994," he says. "You can see the landscape changing, you can see the world waking up, or Africa waking up, to the real power of the internet."

Njoku is at the vanguard of Africa's internet revolution, which promises to change forever the social and political landscape of the continent.

"Africa is the final frontier for global businesses and young entrepreneurs," says Njoku. "Nigeria is like China in the 1990s or like India in the early 2000s."

He adds: "The wave of innovation coming across Africa is unstoppable. I think the rest of the world has stopped growing. People get exciting about 1-2% growth. In Africa, the market is just there -- if you're looking for a return on investment, probably one of the best places to find it is actually in Africa."