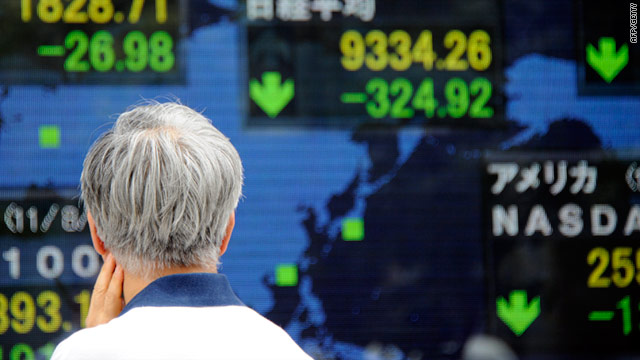 Stock markets around the world reacted to political and economic uncertainty by selling shares, causing a crash.
STORY HIGHLIGHTS

(CNN) -- Turbulence and uncertainty dominated the global financial markets on Friday as a lack of investor and trader confidence continued to drive share values downward.

The global equity sell-off and subsequent stock market fall -- the worst since the 2008 financial crisis -- was caused by a "toxic" cocktail of global economic factors and a lack of decisive political leadership, say leading economists.

Where are Europe's leaders?

With Italy and Spain hanging in the balance and the U.S. economy feeling the jitters, politicians need to take prompt action to calm volatile markets, analysts added.

Douglas McWilliams, Chief Executive of the London-based Center for Economics and Business Research, laid a fair portion of the blame on political leaders.

"Europe has given the impression that a little deal was done (regarding Euro debt crisis) but not very much else and they promised to go back and look at the issue after their summer holidays. This did not create a great image, especially among U.S. investors.

"Investors are worried about a default, they are very worried we are going to default in Italy, which is 21% of the Eurozone and is a very major economy. There is also the U.S. debt ceiling crisis and I don't think everyone feels very happy with the compromise.

"Italy isn't growing and that is the fundamental problem, if you aren't growing it is very difficult to reduce your debt burden."

David Buick, of BGC Partners, said: "Politicians need to stand up, in Europe politicians have been economical with the truth, especially regarding the European debt crisis. There has also been irresponsible behavior by Congress.

"A toxic cocktail (of economic factors) exacerbated by analysts and media-driven hysteria has caused much of this."

European Commission President Jose Manuel Barroso also appeared to show concern Thursday at the way the European debt was being handled by policymakers.

"In fact, the tensions in bond markets reflect a growing concern among investors about the systemic capacity of the euro area to respond to the evolving crisis," he said.

Buick believes there could be a new round of quantitative easing (QE) -- a method used by central bankers to help boost economic growth by printing money. He also thinks central banks will buy more toxic bonds to help stabilize their respective economies.

McWilliams also blamed the time of year for causing some of the problems and believes the markets have moved into "overreaction territory."

"In August the markets are very thin, there aren't so many people trading, and now the markets are even thinner than in the past, so anything that worries people, you get a massive overemphasized effect because the markets swing backwards and forwards."

However, Buick said the current collapse could not be compared with the 2008 fall.

"It is very serious and it could get more serious, but this is not 2008 all over again."