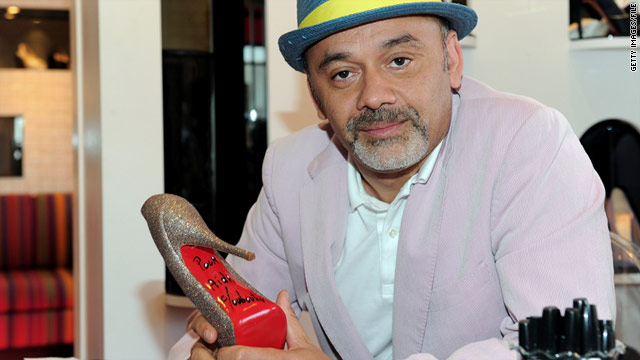 (CNN) -- French shoemaker Christian Louboutin is seeing red -- and will likely be seeing a lot more of it -- after a judge in Manhattan denied an injunction that would have kept fellow designer Yves Saint Laurent from selling shoes with red soles.

"Everyone sees the flash of red and associates the red with Louboutin," attorney Harley Lewin said Thursday about his client.

In fact, Louboutin's red soles have graced many a red carpets, adorning the feet of celebrities Oprah Winfrey, Heidi Klum and Sarah Jessica Parker. In 2009, Jennifer Lopez wrote a song about them, "But it's the last time, I'm movin' on, I'm throwing on my Louboutins."

In his decision Wednesday, U.S. District Judge Victor Marrero acknowleded that in choosing a red sole for his shoes, Louboutin had "departed from longstanding conventions and norms of his industry," to create a product, "so eccentric and striking that it is easily perceived and remembered."

However, Marrero went on to say that, "Louboutin's claim to the 'the color red' is, without some limitation, overly broad and inconsistent with the scene of trademark registration."

"This was a trademark that never should've been issued," David Bernstein, attorney for the defendant, Yves Saint Laurent said.

He adds, "YSL has been using red since the 1970s, other designers have used red on the soles of their shoes. They aren't doing so to confuse people, but because it's a design aesthetic."

"This is no longer about the case," he said.

Judge Marrero's decision drew parallels between painters and fashion designers, calling them both members of a creative industry where no one should be barred from using color to achieve their aesthetic. Doing so could, "interfere with creativity and stifle competition."

Bernstein agrees. "No designer should be able to monopolize a color."

There have been cases when companies have copyrighted color.

Owens Corning, for example, has the trademark for pink fiberglass. Marrero said industrial products are different because the application of color is simply to distinguish one manufacturer from another.

Lewin says his client "separated his shoes from everyone else's by using a red sole."

Lewin said he's never had such an outpouring from his fellow attorneys, law professors and members of the fashion industry, telling him, "This [verdict] is an abomination. Tell your client to appeal."

On August 17, both sides will meet for a case management conference, and Lewin says he will announce his plans to do just that.