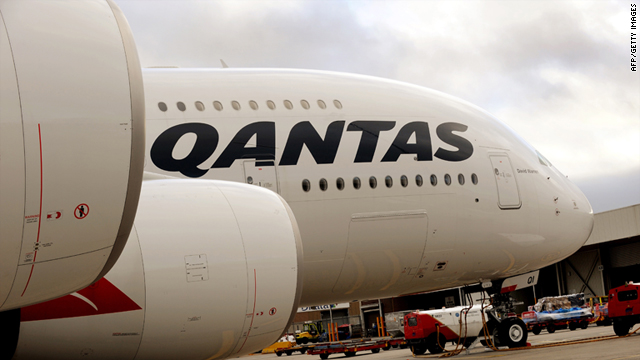 Qantas announced a major restructuring that will see it buy up to 110 Airbus A320s and focus on Asia to stem financial losses.
STORY HIGHLIGHTS
RELATED TOPICS

(CNN) -- Qantas announced a new international strategy on Tuesday with the acquisition of up to 110 Airbus A320s to boost its fleet, including its Jetstar Japan -- a new venture with Japan Airlines and Mitsubishi -- and a new Asia-based airline.

The airline also announced that it will defer the delivery of its final six Airbus A380s by up to six years, and that the retirement of older aircraft and network changes will affect about 1,000 of its 32,500 workforce.

The airline's A380 fleet will nonetheless reach 12 aircraft by the end of the year and 14 aircraft by mid-next year, according to a media release.

The delivery of the remaining six A380s will coincide with the retirement of the airline's final six Boeing 747ER aircraft, the airline said.

"Qantas International is a great airline with a proud history," the airline's CEO Alan Joyce said in a statement. "But it is suffering big financial losses and a substantial decline in market share. To reverse that decline we need fundamental change."

The five-year plan is aimed at returning the airline to profitability, he said.

The Japan earthquake and tsunami; the floods in Queensland, Australia; the Christchurch, New Zealand, earthquake; and two cyclones have taken a toll on the airline. The airline lost an estimated $219 million because of those events.