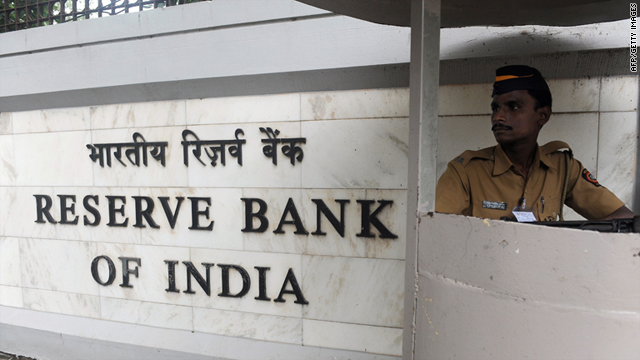 (CNN) -- India's economy registered a slight slowdown in its growth in the first quarter (April to June) this fiscal year. GDP figures came in at 7.7% -- roughly in line with expectations, but lower than the 7.8% growth last quarter.

This is the slowest pace of economic growth in six financial quarters. Analysts largely attribute the slowdown to recent monetary tightening.

India's central bank, the Reserve Bank of India, has raised interest rates 11 times in the last 18 months in an attempt to curb double-digit inflation.

The rate hikes have led to a slowdown in domestic consumption, which is reflected in India's auto industry. Auto sales in India fell in July for the first time in nearly 3 years.

He raised a red flag about the poor performance of the mining sector, saying it could lead to a slowdown in manufacturing. He also said a sharp fall in construction activity in India is a worry, as this sector employs a vast number of India's population.

The GDP figures come amid an ant-corruption campaign that has gripped the country in recent days. Investors are waiting to see what impact the movement led by anti-graft campaigner Anna Hazare will have on the economy -- dubbed "Annanomics."

Industry leaders say they hope the anti-corruption momentum will spur growth by creating a transparent environment for investors.

"It could be a key game changer for long term growth," Joshi said. India has been rocked by a number of scams in recent months, including one in the telecom sector, which has cost the country billions of dollars.