Should you make friends with the boss?

By Tim Hume for CNN 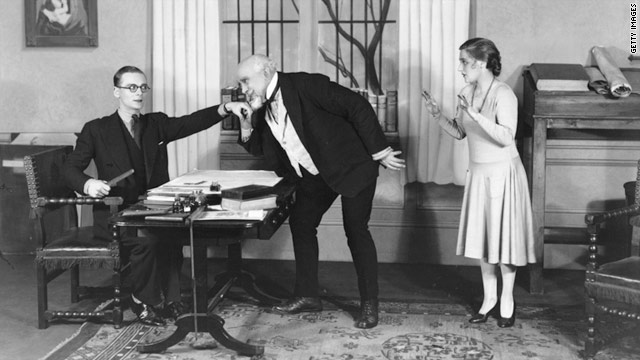 A man kisses the hand of his boss, in a scene from the play 'Fortunato', 19 October, 1928.
STORY HIGHLIGHTS

(CNN) -- The boundaries of the boss-employee relationship were once clear and unambiguous. The boss was the distant, forbidding figure who gave the orders, while the employee's place was to do as they were told.

But changes in workplace culture have transformed the rules of engagement. The division between work and private life has blurred, and many top executives now seek a closer, more honest relationship with their subordinates. Kevin Roberts, CEO Worldwide of Saatchi & Saatchi, describes the ideal relationship with his staff as "family-like."

"I don't mean that in a soft way," he told CNN. "There is no more performance-focused unit than a family. Families are caring and demanding, and families share stuff: things, stories, belongings, memories. We all work more productively when we're secure and happy."

Few will ever confuse their bosses for family. But don't make the mistake of thinking they're your friend, either.

Employees will always be on an unequal footing when it comes to their relationships with their bosses, with any missteps threatening serious career consequences. So is it ever a good idea to try to strike up a close personal relationship with your boss across the social minefield of the office?

If the boss is a role model, it's always to your benefit to get closer.
--Dr Jochen Menges
RELATED TOPICS

Dr Jochen Menges, of Cambridge Judge Business School, has co-authored research which concluded an important factor to consider when deciding whether to get close to your boss is whether you admire them.

"If the boss is a role model, it's always to your benefit to get closer," he told CNN, adding that this intimacy benefits companies as well. The subordinate gets valuable mentoring and, as the relationship develops, they'll feel less intimidated and more comfortable speaking honestly and critically on company matters.

Developing social relationships with office powerbrokers can also give you an inside track on promotions, according to Patricia Pryce, a Cranfield School of Management doctoral researcher studying the way social capital is used by top executives.

Beyond a formal organizational hierarchy, most workplaces also have informal power networks that could play a role in guiding key decisions, including senior appointments. These networks might convene at the pub or at sporting events outside regular office hours. If you were to take part, "then you're likely to be more visible to the people making those decisions, and therefore your career route to the top might be easier," said Pryce.

Discussing personal matters over a pint with your boss could also be helpful in allowing you to understand "the hinterland of their professional life", said Fiona Sandford, career services director at London Business School. "The pressures your boss is under, and what are they bringing to work. You're going to be a more effective person if you know what makes them tick. But that doesn't mean you share everything with them. It would be a big mistake to get sloshed and show a side you don't want to show."

Which is why Professor Andrew Kakabadse of the Cranfield School of Management is ambivalent about the merits of getting close to your boss. "It works brilliantly for some people, and is terrible for others," he said. "Sometimes knowing somebody too much doesn't help. The real question is: do you have the brains for the job?"

As for what sort of boss might be amenable to a more personal relationship, or what the boundaries of that relationship might be, it seems there's no real rule of thumb. No industry sector or nationality or career level was more likely than another to produce close boss-employee personal relationships, said Kakabadse. It came down to "reading the chemistries", the personal quirks and motivations of individual executives, which is part of the reason schools are now building emotional intelligence components into their curricula. "You just have to use your instincts in this," he said. "It's about reading your boss more than anything."