Suspect in custody in killing of Portuguese man in New York 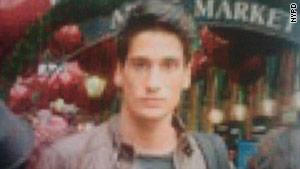 Carlos Antonio De Castro, 65, was found dead in his room at the InterContinental Hotel in New York on Friday, according to the source. He was a Portuguese reporter and columnist.

Police say 20-year-old Renato Seabra, a Portuguese model, was in custody Saturday after he was spotted leaving another New York hospital where he received treatment for lacerations to his wrists. Police arrested him and transported him to Bellevue.

Castro's body was found after an acquaintance appeared at the hotel asking to see him, saying she had been in contact with him earlier in the day but was unable to reach him for some time, according to the law enforcement source.

Hotel employees made the grisly discovery a short time later. Castro was found bludgeoned and castrated, the source said.

Castro and Seabra were staying together at the hotel, another police source said.

Castro was most recently a gossip columnist for the Portuguese newspaper Correio da Manha.

It was unclear why the two men were in New York.

CNN's Susan Candiotti and Leslie Tripp contributed to this report.