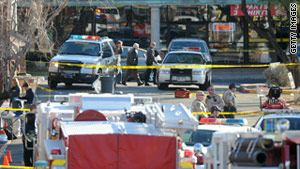 Screams can be heard in one 911 calll as a male caller at the scene tells another man, "We got help coming."
STORY HIGHLIGHTS

(CNN) -- A day after a gunman opened fire at an Arizona supermarket, authorities released the emergency calls.

The recordings, which were made public by the Pima County Sheriff's Office on Sunday, paint a patchy picture of the scene just moments after the shooting that killed six people and wounded 14, including U.S. Rep. Gabrielle Giffords.

Callers spoke with remarkable clarity given the chaos around them. Screams can be heard in the background as one male caller calmly tells another man, "We got help coming."

The following information has been edited for brevity and to protect the names of the callers. Not all calls are included.

Caller 1: Yes, it looked like the guy had a semiautomatic pistol and he went in. He just started firing. And then he ran.

Caller 1: He ran north past the Walgreens that's right next to the Safeway.

Caller 1: He was wearing a hoodie.

911: Is anybody injured? Did you say Gabrielle Giffords was hit?

911: And there's other people that are injured?

Caller 1: There was multiple people shot.

Caller 2: I witnessed ... gunshot and then I tried to duck down. I see the man that was caught shooting was held down by some other people. They took away his gun and they're holding him down so he can't do anything else.

911: OK, we do have deputies on the way. They'll be there shortly. I need you to stay out of the way where you're at right now and try to get anyone else to safety without getting yourself in any harm, OK?

Caller 2: OK, yeah. I'm in the Walgreens in the back so that way I feel like I'm a little more safe.

Caller 2: And are you sending lots of ambulances too?

911: Emergency dispatcher, what is the address?

Caller 3: A guy came to the Safeway and started shooting. I saw him. He was in a beanie and a hooded sweatshirt and jeans.