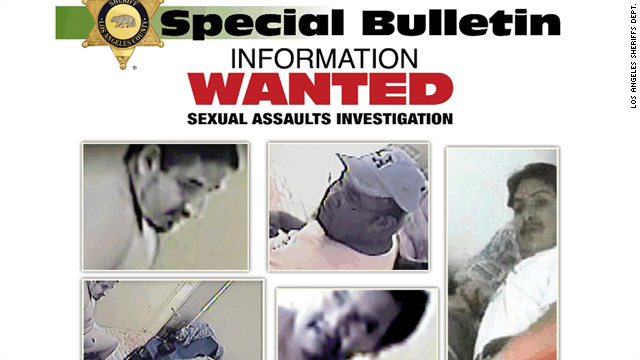 Police began searching for four suspects after receiving a video from an anonymous tipster.
STORY HIGHLIGHTS

(CNN) -- Police arrested a suspect believed to be one of four men shown in a video apparently sexually assaulting disabled women in a care home and other places, authorities said in a statement.

On Saturday morning, Lloyd went to a Los Angeles police station, "saying that he had seen himself on the news and that he knew he was wanted," the statement said. During an interview with detectives, Lloyd "implicated himself," authorities said.

He was arrested on suspicion of rape of a person with disabilities, the statement said, and bail was set at $100,000.

On Friday, authorities said another suspect had been identified as Bert Hicks, 41, who is now serving a state prison sentence in California's Tehachapi State Prison for fiduciary crimes, abuse and sexual assault in a residential care facility.

Hicks allegedly took a disabled woman to Las Vegas, married her and then brought her back to the care facility, where she was repeatedly sexually assaulted by other men, said sheriff's Detective Ron Anderson. Authorities don't know if the crimes Hicks was convicted of are the ones depicted on video, he said.

On Thursday, authorities issued a public appeal for help after the video was mailed to them by an anonymous tipster. City of Los Angeles police detectives saw Thursday's media coverage and told the sheriff's office that they could identify two of the four suspects shown in composite sketches, Los Angeles County Sheriff's Sgt. Dan Scott told CNN. One of the victims was also identified.

"The investigation is still in its early stages, but detectives believe that it occurred in 2007 or earlier at a residential care facility in the city of Los Angeles, where both Suspect Lloyd and the female adult victim were living at that time," the sheriff's statement said.

Police have identified the victim by name, but have been unable to locate her, as neither she nor Lloyd still resides at the facility where the alleged assault occurred, authorities said. Sheriff's detectives were working with investigators from the Los Angeles County Department of Public Social Services and Los Angeles police to locate the woman.

The 13 DVDs mailed by the anonymous tipster to the sheriff last March contain more than 100 hours of video of at least 10 men apparently sexually assaulting at least eight severely disabled women in a care home and several other locations, according to Scott and Anderson.

Sheriff's investigators spent months reviewing the grainy video and were able to come up with composites of only four of the 10 suspects, authorities said. Investigators believe the sexual assaults occurred in the past three to five years, Anderson said.

Since the information was made public on Thursday, "scores of tips" have come in to authorities, the statement said.

"The public is clearly shocked and disturbed by every aspect of this case," Scott said in the statement. "We heard from so many people who want to help, as well as from people who fear their loved ones may have been among the women abused."

The identification of two suspects was considered a major break in the case, because the leads could allow authorities to determine identities of the other eight suspects and the locations of the alleged rapes, authorities said.

More remains to be done, Scott said in the Saturday statement. "There are still two more suspects whose images have been shared who have not yet been identified, as well as ... other suspects. Of great importance to us as well is that we need to find and help all of the victims."

The sheriff's department has made the inquiries "a high priority," Scott said.

Authorities are still asking for the tipster to come forward -- even anonymously, by contacting a hot line -- and provide more details on the video.

A "To Police" letter accompanying the video states that the tipster was a computer technician who was hired by a man to wipe clean a hard drive on a laptop that the man bought for $20 from a "crackhead" on a street in Inglewood, California, Anderson said.

When the computer technician saw the video, he was so disturbed that he made copies of the DVDs and mailed them to the sheriff, Anderson said.

In the letter, the technician said the laptop purchaser was also aware of the video content.

Authorities allowed CNN to see the letter, which contains grammatical errors. It says in part:

"He saw what was on the hard drive and ask could I wipe it and restage Windows, etc. I did restage but I have to copy this stuff for a police action," the letter says.

"The video's found on the hard drive was disturbing and made me sick. I had to turn it in and I pray that you find these (expletives) in the video's molesting handicap people," the letter continues.

Authorities said the graphic video even depicted one female victim in a wheelchair who was wearing a diaper.

The suspects allegedly sexually assaulted "people in bed unable to move. They can't pick up the phone," Scott said.

Added Anderson: "I've seen a lot of terrible, terrible imagery in my assignment, that involved children and all kinds of hideous things. This is among the most heinous I've ever seen. ... What I saw was just these poor people lying there being victimized in the most terrible way I've ever seen."

The video was shot by a security camera and a handheld camera, Scott said.

Detectives asked the tipster to call the anonymous Crime Stoppers communication system at 800-222-8477 and provide details on the video's origin. Investigators said the public can also call the special victim bureau's hot line at 866-247-5877. Information can also be provided anonymously by texting the letters TIPLA plus the tip to CRIMES (274637) or by accessing the Crime Stoppers website at www.lacrimestoppers.org.