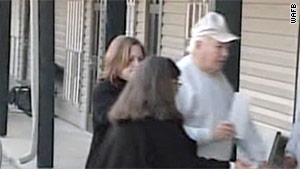 Edwards was convicted of racketeering, conspiracy and extortion after prosecutors said he asked for payoffs from people who applied for riverboat casino licenses in New Orleans in the 1990s.

Edwards, 83, had pursued a pardon from President George W. Bush, but never got one. He began serving his sentence in February 2001.

He was released from prison to a halfway house, said Edmond Ross, spokesman for the Bureau of Prisons.

At Edwards' trial in 2000, star witness Edward J. DeBartolo Jr., former owner of the San Francisco 49ers, got a reduced sentence in exchange for testifying about his own $400,000 bribe to Edwards. He said he had felt compelled to make the payment. DeBartolo ended up not going through with the project after the scandal broke.

Allegations of corruption dogged Edwards throughout much of his political career, but he always maintained that he'd never lose an election, and famously joked that he'd keep his office unless he was caught "in bed with a dead girl or a live boy."

Frequently during his trial -- for allegedly extorting almost $3 million from casino applicants -- he held his own court on the courthouse steps. "Today, I took care of some housekeeping and had my car fixed and went and cashed a check before they freeze my accounts," he told reporters at one point.

Edwards served several terms in office -- from 1972 to 1980, 1984 to 1988 and 1992 to 1996. The Democrat, U.S. Navy aviation cadet and lawyer began his career as a city councilman and state representative before being elected to Congress, and then governor.

He won his first gubernatorial term "by an unprecedented combination of 'Cajun' and black votes," according to his biography on the Louisiana Secretary of State's website.

"Edwards named blacks to key state positions and his support of black politicians resulted in a mutually beneficial relationship," the biography says.

His third term "was marked by federal indictments, but not convictions, for mail fraud, obstruction of justice and public bribery," the biography adds.

The bio does not refer to Edwards' conviction later on.

The U.S. District Attorney's Office for the Eastern District of Louisiana, on its website, describes Edwards as "leader of the corrupt enterprise whose objectives included the illegal and corrupt manipulation of the riverboat gaming licensing process during and after his four terms as governor."