From Bryan Lavietes, In Session 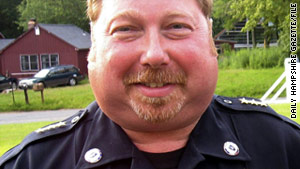 Ex-Police Chief Edward Fleury says the gun show where the boy died was meant to be an "educational event."
STORY HIGHLIGHTS
RELATED TOPICS

Springfield, Massachusetts (CNN) -- A former police chief was found not guilty Friday of involuntary manslaughter in the 2008 death of an 8-year-old boy who accidentally shot himself with a micro Uzi machine gun during a gun show.

Former Pelham, Massachusetts, Police Chief Edward Fleury, 53, was also acquitted of three counts of furnishing a machine gun to a minor in connection with the show that he helped organize. It was held at the Westfield Sportsman's Club in Westfield, Massachusetts.

During the gun show, 8-year-old Christopher Bizilj was firing the micro Uzi when he accidentally shot himself in the head. He died instantly.

Upon hearing the verdict, Fleury broke into tears. He later hugged his wife and spoke to reporters outside the courtroom, offering his condolences to the Bizilj family.

Christopher's father, Charles Bizilj, was present at the time of the shooting and videotaped the entire incident. Parts of that tape were shown to the jury, which also heard emotional testimony from the father. The trial lasted 10 days.

"I ran over to him. His eyes were open and I saw no reason for him to be on the ground. And I tried to talk to him and he didn't respond. I put my hand behind his head to try to pick him up and there was a large portion of his cranium missing. And I put my hand against the back of his head," Charles Bizilj told members of the Hampden County jury.

Fleury faced up to 20 years in prison if convicted of involuntary manslaughter and up to 10 years for each count of furnishing a machine gun to a minor.

His lawyer, Rosemary Scapicchio, had argued that while Fleury helped organize the show, he wasn't directly responsible and hadn't actually given guns to the children there.

Carl Giuffre and Domenico Spano have also been charged in connection with the incident. The two were in charge of the show's shooting range and are accused of having provided the Uzi that killed Christopher Bizilj. Prosecutor William Bennett said he will decide next week whether to proceed with the case against them, given Fleury's acquittal.