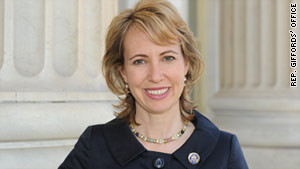 Tucson, Arizona (CNN) -- U.S. Rep. Gabrielle Giffords has been upgraded from critical to serious condition, eight days after being shot through the brain at a public event.

"The congresswoman continues to do well," University Medical Center in Tucson said Sunday in a statement.

Giffords has been off the ventilator and breathing on her own, through a tracheotomy tube, since a surgical procedure on Saturday. A feeding tube was inserted as part of the same operation, which took place exactly one week after a bullet went in and out of her skull.

The Arizona Democrat is moving both sides of her body, her friend and fellow congresswoman, Sen. Kirsten Gillibrand, said Sunday.

Gillibrand told CBS' "Face the Nation" that Giffords is moving both sides of her body and is "showing people that she can communicate well by, you know, holding our hands and moving her arms and legs and looking at us. So she's making great progress."

Giffords was among 19 people shot at the "Congress on Your Corner" event at a Tucson supermarket. Authorities believe she was the target of the mass shooting that left six dead and another 13 wounded. A 22-year-old suspect, Jared Lee Loughner, is in custody.

Also Sunday, hundreds of Arizonans, some pushing baby strollers and others walking dogs, turned out for a "Walk for Peace" to honor Giffords and the other shooting victims.

Moment of silence at site of AZ shooting

Participant Mike Urbanski said he was a high school classmate of U.S. District Judge John Roll, who was killed in the shooting. He said he had attended Roll's funeral, as well as that of nine-year-old Christina Green.

"We really love the Tucson community ... I think it's rocked us all, so this is kind of for us today also, I think," Urbanski said.

"I was so sad for the families (of the victims), and so I just said, 'Hey, let's start something,' " organizer Amanda Lopez said. She and her friends handed out more than 1,000 fliers and helped spread the word through Facebook. She said she was surprised at the turnout, which she estimated at more than 200 people.

Participants cheered as they walked through Tucson streets, with the first walkers carrying a large peace banner. Some drivers honked in support.

A funeral was held Sunday afternoon for Dorwan Stoddard, a retired construction worker, at Calvary Chapel East in Tucson.

Witnesses said when a gunman opened fire at the supermarket, Stoddard was trying to protect his wife, Mavy, when he was shot in the head and fell onto her. Mavy Stoddard was shot three times in her legs but is expected to recover.

Another person wounded in the incident, 58-year-old James Tucker, was released from the hospital Saturday, according to the medical center. Two other victims are in good condition at the hospital. Others were treated and released at hospitals.

In addition to Stoddard, Christina Green and John Roll, those killed in the shooting included Gabe Zimmerman; Dorothy Morris, 76; and Phyllis Schneck, 79.

Sen. Charles Schumer, D-New York, told "Meet The Press" the shooting underscores the need for better gun control laws. Under a current law, Loughner "should not have been allowed to buy a gun" after being rejected by the military for excessive drug use, he said. However, the law does not require the military to notify the FBI about such rejections or for that information to be added to a national database.

In addition, laws aimed at preventing the mentally ill from obtaining guns should be tightened and properly enforced, he said.

Schumer acknowledged that the issue is contentious and making changes is difficult. "We're trying to find some common ground," he said.

Sen. Tom Coburn, R-Oklahoma, told "Meet The Press" the issue is why there was no prior intervention for Loughner.

Criminals and the mentally ill can find ways around gun control laws, he said, which limits the ability of law-abiding people to defend themselves.

"We need to make sure we fix the right problem here," Coburn said. "How do we put our hands around someone who is so disturbed?"

The contentious issue of gun control was also put in the spotlight Saturday when one of the 13 wounded in the attack was involuntarily committed to a county mental services unit after he made threats against a Tea Party member at a town hall event in Tucson.

Humphries told CNN that Fuller's comment came when the town hall discussion turned toward the issue of gun control.

"I was asked to give my thoughts on gun control laws and perhaps the passage of new laws," Humphries said of the incident. "I said something to the effect that although gun rights and laws are not necessarily the primary focus of the Tucson Tea Party, our community needs to be given the opportunity to allow some time to pass and people to heal before we start this type of political dialogue."