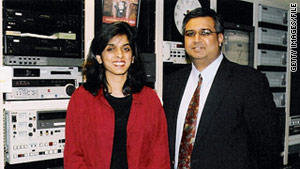 Aasiya Hassan, left, was decapitated by her husband, according to prosecutors. A jury agreed Monday.
STORY HIGHLIGHTS

(CNN) -- After a three-week trial and one hour of deliberations, an upstate New York jury on Monday found Muzzammil "Mo" Hassan guilty of second-degree murder for beheading his wife.

Aasiya Hassan had been decapitated, with prosecutor Paul Bonanno saying during opening arguments that the long knife used by her husband had left marks on his office's tile floor.

Hassan gave his own closing arguments Monday. Earlier in the trial, he had dismissed his attorney, Jeremy Schwartz, who by trial's end was acting as his legal adviser.

"Mr. Hassan has felt that throughout the tenure of his marriage, no one had listened to his side," Schwartz told reporters after the verdict. "It was important for him in the two hours that he had for summation to get across his side and how he saw his marriage."

On the day she died, Aasiya Hassan agreed to take some of her husband's clothes to his office after he had moved out of their home. He had told her he would not be there, prosecutors said.

Schwartz, then his client's defense lawyer, said in his opening statement that the couple's marriage was a "sad and unhealthy relationship" and that Aasiya Hassan threatened to embarrass his client and take away his children.

Hassan fired three defense attorneys before the trial. Schwartz was the fourth to be dismissed, though he stayed as an adviser.