Virginia man bound over in cross-country abduction of girl 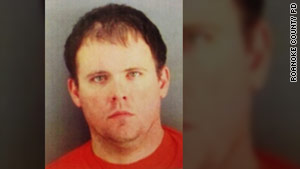 The case against Jeffrey Scott Easley, accused in a cross-country abduction, is going to a grand jury.
STORY HIGHLIGHTS
RELATED TOPICS

(CNN) -- A Virginia judge on Tuesday sent to a grand jury the case against a man accused of abducting a 12-year-old girl whose mother was later found dead.

Roanoke County Juvenile and Domestic Relations Judge Philip Trompeter found probable cause during a preliminary hearing for Jeffrey Scott Easley, who is accused of taking the girl across the country before being spotted outside a San Francisco supermarket.

Theresa Shanley in December spotted Easley, 32, and the girl outside a Safeway store in the Richmond district of San Francisco, then alerted police. Easley was subsequently arrested on abduction charges, as well as counts of credit card theft and credit card fraud. He waived extradition.

Roanoke County Police Chief Ray Lavinder has said Easley is a "very good suspect" in the murder of Tina Smith, the mother of the girl he allegedly abducted. No one has been charged in the 41-year-old woman's death.

For now, only the abduction charge will go to the April 1 grand jury, Hall said.

Easley's attorney, Thomas W. Roe Jr., said his client will contest any and all allegations.

Prosecutors are awaiting the return of DNA laboratory results before proceeding with any charges in Tina Smith's death, Hall said.

In January, Easley wrote a letter to the Roanoke Times, saying the girl was his willing cross-country companion.

"I did not kidnapp her or take her aginest her will," Easley, 32, wrote in a misspelled letter postmarked from the Western Virginia Regional Jail. "She made me promise not to leave her."

"Obviously, we differ," said Hall. "We feel she was taken against her will."

During Tuesday's preliminary hearing, the girl's father, Benjamin Smith, said an order that forbade him having contact with his daughter had been lifted by the time she disappeared, Hall said.

Smith testified that Easley did not have his permission to take the girl out of state.

The girl did not testify Tuesday.

Police believe that Tina Smith, who was Easley's girlfriend, was killed between the morning and evening of December 3. Lavinder in December said authorities believe Easley and Smith's daughter left Virginia that night or early the next day. They traveled cross-country in Tina Smith's silver 2005 Dodge Neon sedan, which was found in a parking lot adjacent to San Francisco International Airport after authorities found Easley.

An Amber Alert was issued for the girl December 6, after police found Tina Smith's body inside her Salem home and discovered that her daughter was missing. From the beginning, public notices named Easley as the girl's alleged abductor.

Shanley said she saw the girl sitting on a curb outside the northern California store while Easley was begging for money. The Safeway was within walking distance of a makeshift campsite containing a tent in which Easley and the girl had been staying.