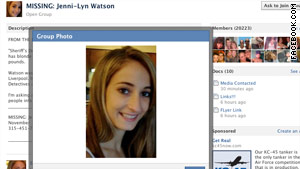 In late November, a massive search for Jenni-Lynn Watson ended with the discovery of her remains at Clay Central Park in North Syracuse, New York.
STORY HIGHLIGHTS
RELATED TOPICS

Although the 20-year-old victim's cell phone was never found, investigators were able to review call and text messages made by Watson and Steven Pieper, the man she was breaking up with, Onondaga County District William Fitzpatrick told CNN.

After dumping Watson's body, Pieper, 21, tried to cover up by texting a mutual friend of theirs, pretending to be Watson, Fitzpatrick said.

Using the letters "GTG" apparently did him in.

Police looked at Pieper's phone, which was left November 19, 2010, at Watson's home in the Syracuse suburb of Liverpool, and pored over records, Fitzpatrick said.

That shorthand for "got to go" was a term used by Pieper, not Watson, the prosecutor said.

Pieper pleaded guilty in Onondaga County Court to second-degree murder in the strangling of Watson. Rather than 25 years to life, a plea agreement calls for him to receive a sentence of 23 years to life at the March 8 sentencing, Fitzpatrick said, adding Pieper must serve 23 years before he gets a parole hearing.

"Steven made it clear that he did not want to put the Watson family or his family through a trial in this matter, from the very beginning," defense attorney Scott Brenneck told CNN affiliate YNN. "So after a review of the case, it was an appropriate way to resolve it."

In late November, a massive search for Watson, a dance major, ended with the discovery of her remains at Clay Central Park in North Syracuse, the Onondaga County Sheriff's Office said.

Watson and Pieper had dated on and off for 18 months and Pieper went over to Watson's home the morning of Nov. 19, authorities said.

"I don't think he went over there with the intent to kill her," said Fitzpatrick, adding Pieper was there about two hours. At some point the young woman told Pieper she wanted to have other relationships and he became angry and killed her, the district attorney said.

The suspect allegedly placed Watson's body in her car and drove off, only to be stopped several minutes later because there was no front license plate on his vehicle, Fitzpatrick said. Pieper, who received a warning, decided then to dump the body, he said.

"He didn't have a long-term plan," the prosecutor said.

"On that particular day he was consumed with evil and he killed that poor little girl than no other reason than she wanted to move on with her life," Fitzpatrick told reporters after the hearing.

The case against Pieper was "strong" and Watson's family supported the plea, he said.

Watson was last seen at her family's home. She was on Thanksgiving break from Mercyhurst College in Erie, Pennsylvania.