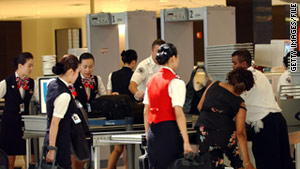 The TSA says the case "should not reflect negatively on the approximately 50,000 TSA officers across the country."
STORY HIGHLIGHTS
RELATED TOPICS

On January 30, the men, identified as Persad Coumar and Davon Webb, allegedly discovered a bag containing $170,000 using an X-ray machine and removed some of the money inside, the district attorney said.

According to a TSA official, the two men were reported by a fellow TSA employee, prompting an investigation.

The homes of the two men were searched by Port Authority police and all but $20 was recovered, the district attorney's office said.

The two men are awaiting arraignment on charges of third-degree grand larceny, fifth-degree conspiracy, third-degree criminal possession of stolen property and official misconduct, according to the district attorney's office. The charges carry a penalty of up to seven years in prison.

Also, the origin of the $170,000 is being investigated on the suspicion that it may be linked to drugs, according to a source with knowledge of the situation. However, the woman who checked the bag boarded the plane and is now in Argentina.

This incident comes in the wake of 12 reported TSA thefts involving checked baggage or security checkpoints over the past three years, according to the TSA.

However, in a statement Wednesday, the agency said, "The disgraceful actions of a few should not reflect negatively on the approximately 50,000 TSA officers across the country who work each day to keep the traveling public safe."