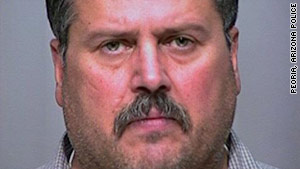 Read more about this story from CNN affiliate KTVK.

(CNN) -- Sentencing testimony begins Wednesday in the case of an Iraqi man who was convicted of running over his 20-year-old daughter because she allegedly had become "too Westernized."

It also found him guilty of aggravated assault, for causing serious injuries to Amal Edan Khalaf, the mother of Noor's fiance, and two counts of leaving the scene.

He could receive up to 22 years in prison on the murder charge alone.

Noor Faleh Almaleki died in November 2009 at an Arizona hospital, nearly two weeks after being run over by a Jeep in a parking lot in the Phoenix suburb of Peoria, authorities said.

Faleh Hassan Almaleki believed his daughter had become "too Westernized" and had abandoned "traditional" Iraqi values, Peoria police said. The family moved to the Phoenix area in the mid-1990s, and Almaleki was unhappy with his daughter's style of dress and her resistance to his rules, they said.

Khalaf testified that Almaleki made no effort to stop before she and Noor Almaleki were struck, according to CNN Phoenix affiliate KTVK.

Defense lawyers said Almaleki was trying to spit on Khalaf, but swerved and ended up running down both women, KTVK reported.

Almaleki chose not to testify.

After the incident, Almaleki drove to Mexico, abandoning his vehicle in Nogales, police said. He then made his way to Mexico City and boarded a plane to Britain, where authorities denied him entry into the country and put him on a plane back to the United States.