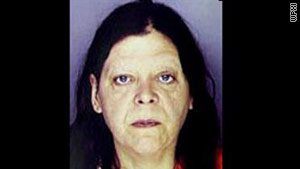 Marjorie Diehl-Armstrong was sentenced for helping a man with a 2003 robbery on the outskirts of Erie, Pennsylvania.
STORY HIGHLIGHTS
RELATED TOPICS

Erie, Pennsylvania (CNN) -- Marjorie Diehl-Armstrong was sentenced to life in prison plus 30 years on Monday for her role in an Erie, Pennsylvania, bank robbery that led to the death of a pizza deliveryman who had a pipe bomb fastened around his neck, a prosecutor said.

Diehl-Armstrong was convicted on November 1 of conspiracy to commit armed bank robbery, armed bank robbery in which death resulted, and use of a destructive device in furtherance of a crime of violence, according to U.S. Attorney David J. Hickton.

"She was motivated by greed and completely characterized by evil," Assistant U.S. Attorney Marshall Piccinini said during Monday's sentencing.

Diehl-Armstrong appeared in federal court in Erie and was sentenced for aiding Kenneth Barnes, 55, in the deadly 2003 robbery, Hickton said in a written statement.

She said she was convicted unfairly and "was not part of this conspiracy."

"I am not a crazed killer," Diehl-Armstrong said in court. "The true killers are still out there."

Co-conspirator Barnes was sentenced to 45 years in prison for taking part in what the judge in the case described as an "incredibly bizarre" plot in which Brian Wells died when the bomb affixed to his neck exploded.

At Barnes' sentencing in December 2008, prosecutors repeated their contention that the pizza deliveryman was involved in planning the robbery attempt but wore a live bomb only after being threatened by his co-conspirators.

Prosecutors said Barnes and three co-conspirators -- one of whom was Wells -- planned to rob a PNC Bank on the outskirts of Erie.

On August 28, 2003, authorities said, Wells walked into the bank with the pipe bomb locked to his neck and gave a teller a note demanding money. The robbery netted about $8,700.

Wells died when the bomb exploded as he sat in a parking lot after being stopped by police shortly after the robbery.

The case drew national attention and was the subject of intense investigation and questions about whether Wells was a willing participant or a murder victim.

Prosecutors said after Barnes' sentencing that Wells was involved in planning the robbery but balked when he realized that the bomb he was supposed to wear was real. He was threatened with a gun to make him wear the bomb, according to prosecutors.

Diehl-Armstrong's case was delayed because she underwent treatment at a federal facility in Texas after the judge in the case found her mentally incompetent to stand trial.

The fourth suspect died of a drug overdose three days after the robbery, officials said.