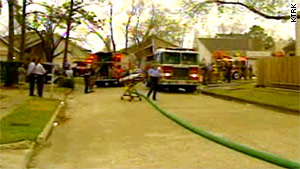 (CNN) -- Texas authorities have issued an arrest warrant for the owner of a day care center, claiming four children died and three were injured in a fire last week after she left them alone with the stove on, authorities said Monday.

Authorities hope to detain 22-year-old Jessica Tata on a felony charge that she caused injury to a child, according to Donna Hawkins, a spokeswoman for the Harris County District Attorney's office. Other charges could come at a later date.

Tata had been licensed since March 1, 2010, with state authorities to run the residential day care center, Texas Department of Family and Protective Services spokeswoman Gwen Carter said. The facility was cited once -- and the issue was sufficiently addressed -- for not having a fire extinguisher or carbon monoxide detector before she got her permit, according to Carter.

The arrest affidavit, dated Sunday, claims that Tata "unlawfully and recklessly" caused "serious bodily injury" to at least one of the victims Thursday, after she left that child and six others unsupervised in the home day care and drove off in her car.

The blaze itself likely originated on an electric stove inside, which was on and had a pot on it containing oil, according to Houston Fire Department arson investigator Thomas Wood. A definitive cause for the fire will be announced once the investigation is complete.

Neighbors John Chestnut and Geoffrey Deshano told investigators that they heard Tata screaming soon after she pulled into her driveway and went to the front door, the arrest affidavit said. No other adults or day care employees were at the facility, the men said.

The two told reporters that Tata's car was full of groceries when she returned to the house, adding that they called 911 and tried to help get the children out as smoke seeped from the building.

"I came to the side of the house in the backyard and smashed one of the windows open, and I could see a kid having his hands out," Deshano told reporters. "I tried to grab him, but the smoke got into my face and my mouth and I couldn't breathe or see anything, and so I had to pull back,"

Chestnut added that he crawled into the house in an attempt to rescue the children.

"I can't see anything, it's hot and I'm coughing and can't breathe and all I hear are kids left and right saying, 'Help me, help me!' " he recalled.

There were seven small children, between 15 months and 3 years of age, inside Jackie's Child Care when firefighters came minutes later.

Hawkins said Tata will be charged with at least one count of reckless injury to a child involving serious bodily injury. If convicted on that one count alone, she would face two to 10 years in prison.

Emmanuel Kajoh, whose 19-month-old daughter Elizabeth died in the fire, described Tata as a "very good lady" who "loves kids." He told HLN's Vinnie Politan that he never had problems with the day care, calling the incident "unfortunate."

Still, for all his positive thoughts about Tata prior to this incident, Kajoh said he couldn't defend her actions last week.

"She had options to call people," he said of the day care owner's decision to leave the children unattended. "Even it is one child, not several children, that was a really bad decision. And it cost four lives."