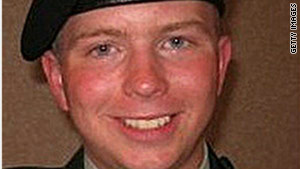 Pfc. Bradley Manning is being held in the brig at Quantico Marine Base south of Washington, D.C.
STORY HIGHLIGHTS

The most serious new charge alleges that he aided the enemy by making this information public. That charge is punishable by death. A news release from the Army said the prosecution team "has notified the defense that the prosecution will not recommend the death penalty," but technically it is up to the commander overseeing the case to make the final decision about the death penalty.

All told, Manning, a military intelligence analyst from Oklahoma, now faces a total of 34 charges in the case, including:

-- Wrongfully causing intelligence to be published on the internet

Manning's lawyer, David Coombs, would not comment on the new charges, but posted a statement on his blog Wednesday evening:

"Over the past few weeks, the defense has been preparing for the possibility of additional charges in this case."

U.S. military officials have said that Manning is the prime suspect in the leak of many thousands of classified documents that ended up on the WikiLeaks website. However, WikiLeaks is not mentioned in the charge sheets.

Even though the investigators filed the new charges, there are still several legal steps that would be taken before any decision will be made on which charges, if any, Manning would actually face in a court-martial.

One of those steps involves determining Manning's mental capacity. That step is expected to take two to six more weeks.

Manning is currently being held in the brig at Quantico Marine Base south of Washington, D.C. There has been a push by friends and supporters to have the rules about his confinement conditions eased. They say his confinement, in a one-man cell with only one hour a day outside of the cell for exercise, is unfair.