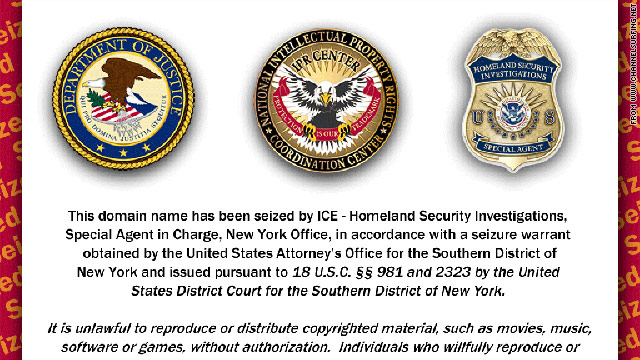 (CNN) -- The popular website ChannelSurfing.net has been shut down and its owner charged with distributing pirated TV shows, first-run movies, and sporting events protected under copyright laws.

The programs allegedly distributed include "South Park," "The Office," and popular football, hockey, basketball and World Wrestling events, as well as shows from the Poker Channel, and live events from MSNBC, CNBC, and Fox News.

According to the criminal complaint, Brian McCarthy, 32, of Deer Park, Texas, was arrested and charged with running ChannelSurfing.net, which allowed people to link to sites illegally streaming sporting events, pay-per-view events and other TV programming from the NFL, NHL, NBA, World Wrestling Entertainment and Ultimate Fighting Championship.

Networks like NBC and ESPN paid fees to the sports leagues to broadcast the events exclusively, according to the criminal complaint.

In announcing the arrest, Manhattan U.S. Attorney Preet Bharara said, "Brian McCarthy allegedly hid behind the anonymity of the internet to make a quick buck through what is little more than high-tech thievery." Federal agents say McCarthy ran the business from his home and "made well over $90,000," largely through advertising.

Federal agents have been targeting websites selling pirated and counterfeit goods, including sports equipment, handbags, movies and music. This past November, Immigration and Customs Enforcement seized 82 domain names, shutting down the websites and disrupting the business.

Usually the businesses disappear and then re-emerge under another name. An official with knowledge of the case said this is the first time an individual has been arrested for allegedly running such a sites.